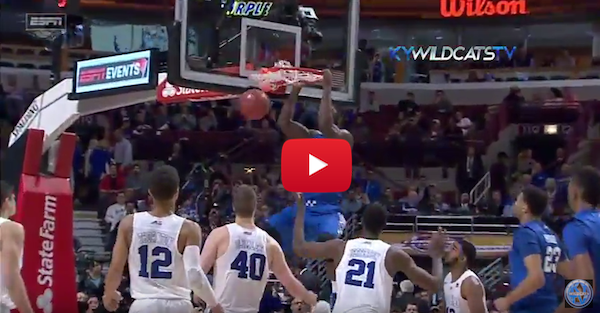 Kentucky didn’t have as big expectations as it usually does coming into the 2015-16 season. Guys like the Harrison twins were gone, Devin Booker bolted for the NBA (and has been playing well by the way), Karl-Anthony Towns became the top pick in the Draft and UK’s 2015 class only ended up with one real playmaker for this past season.

However, coach John Calipari got his guys together and playing well like he usually does and finished the season 27-9 after a rare round of 32 exit at the hands of the Indiana Hoosiers. Tyler Ulis and Jamal Murray played some truly inspired basketball averaging 37.3 points, 9.2 assists and 8.2 rebounds combined. Ulis was named SEC Player of the Year and Defensive Player of the Year. Murray was named to the All-Freshman team as well.

Check out the video for the best highlights of the season before some of these guys end up going pro!