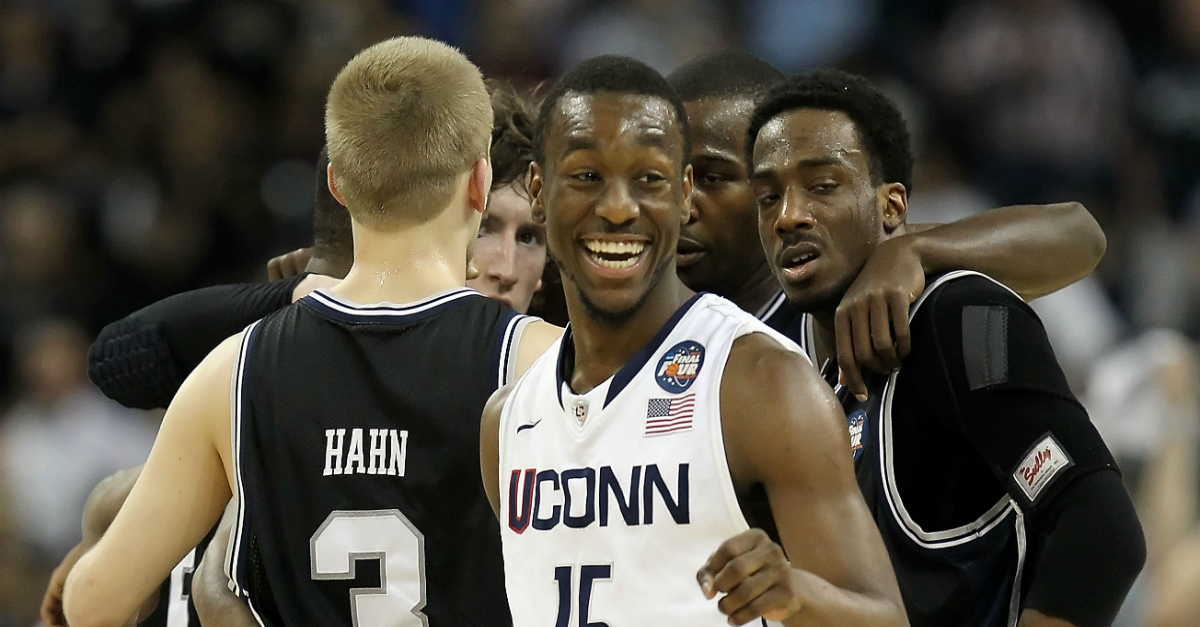 The way college basketball determines its national champion is great fun. However, it is an imperfect system that has purposely designed anarchy structured at its foundation.

By not playing a best-of-whatever series, instead opting for the single-game elimination format, its hard to expect the actual best team in the country to win the NCAA Tournament season over season. In fact, since 68 teams are invited to participate in the Big Dance, you would be better served betting on the field to win the national title.

Funny how math works like that, but anything can happen in a single game, including the nation’s best team falling to an inferior opponent.

That being said, the last decade of college basketball has been fantastic. The one-and-done era has provided a platform for NBA-level players to dominate against guys who will likely work in a suit and tie rather than a pair of shorts.

In a celebration of the last decade, we’re going to rank the last 10 NCAA Tournament champions. Considering it is incredibly hard to compare teams, given data from each season is different and a billion other variables, there’s really no set criteria for how each is ranked outside my own biases, viewpoints and super secret hidden agendas.

Just know that I hate your favorite college basketball program and that is why they are ranked too low.

Remember when people believed UConn’s victory over the Kentucky Wildcats in the title game meant that a smooth transition between the Jim Calhoun era to the Kevin Ollie one was official? Those takes have aged poorly.

This one is ranked last out of the 10 for numerous reasons. Instead of focusing on the negative, let’s remember some of the positive. Most notably, Shabazz Napier played so well for the Huskies down the stretch that it led to LeBron James publicly campaigning for the Miami Heat to draft him. The Heat did, LeBron left anyway, and now Napier is on his third different NBA team.

That’s all that really needs to be said about this version of the Huskies.

Heading into March, it appeared as though the 2010-11 UConn squad wasn’t even going to make the NCAA Tournament. Then, because of course, Walker dominated the Big East Tournament, giving the Huskies the auto-bid to the Big Dance, and Calhoun rode that momentum all the way to the NCAA Tournament title.

Walker finished that season averaging an absurd 23.5 points per game. Still, make no bones about it, it was his historic performances at Madison Square Garden that will keep this team’s legacy lasting longer than it otherwise should.

Now that we slotted UConn as the cellar-dwellers, let’s start splitting hairs.

UNC falls to eighth in what could possibly be a bias against recency bias. In an attempt to not let what happened last overtake my emotions, it is possible that the Tar Heels are ranked lower than they should be.

Then again, it is almost like I’m penalizing this team for being a bit balanced, but lacking a dominating star-type of talent. Yeah, yeah. Justin Jackson and Kennedy Meeks were really good, as was Joel Berry for that matter, but it took a string of outbursts from then-unknown Luke Maye to help the program earn yet another championship banner.

All the kids love Maye now, but he only averaged 5.5 points per game that season. In the NCAA Tournament, despite playing objectively iffy in the last two games of it, Maye had three games in which he scored 10 points or more, matching how many double-digit games he had in the regular season.

There were some real positives to this team. The biggest of which was how fun they were to consume, as UNC averaged 84.4 points per contest. NBA folks might believe that number is too low, but in the realm of unpaid labor, the Tar Heels might have well been putting up a billion per game.

I want to put this team higher. I argued with myself numerous times about putting this team higher. And yet, here I am, with the best dressed coach in the history of college basketball seeing his team ranked as the seventh-best NCAA Tournament champ of the last 10 years.

Anyway, this is likely happening from me refusing to allow the hindsight of Jalen Brunson’s growth as a player get in the way. Knowing just how great Brunson would eventually become should have no impact on how good he was as a freshman (he was still very, very good).

The first high-major team to value small-ball and taking a ton of shots from beyond the arcs, Nova was a joy to watch that season. Ryan Arcidiacono — aka, Ryan Alotofvowelso — was the cagey vet, Josh Hart was the Big East Player of the Year, and Kris Jenkins made the most important shot in the new history of the modified Big East Conference.

This shot legitimized a league that was — at least at the time — not getting its just due. While there remain a few randoms who believe the Big East to be a mid-major, or not what it once was, this really aided in silencing most of the critics.

Well, at least the smart ones.

Again, ugh, I want them to be ranked higher. This is my list, though. I have no one to blame for them being only seventh but myself.

Is hindsight of Jahlil Okafor being a ho-hum NBA player hurting this team’s stock? Maybe. Maybe not. It depends, as it could be argued that the Blue Devils are unjustly ranked ahead Villanova.

This squad had a silly amount of talent on it, and despite winning the entire shebang, it could be argued that this roster filled with former McDonald’s All-Americans still somehow managed to underachieve a little bit.

Not only was future NBA Draft bust Okafor on this Duke team, but so was Justise Winslow, as well as another future NBA talent in Tyus Jones. All the NBA players, really.

Oh, did I mention that a freshman version of Grayson Allen was on this roster? This was before all the tripping, weird attempts to explain his bad behavior on the court as a redemption story, and him becoming the Duke player who decided to play all four years at the school.

Of course, there was also a Plumlee on this team. For the 2014-15 Blue Devils, it was Marshall.

What this team lacked in NBA-level talent in comparison to the Blue Devils, the Louisville Cardinals made up for by having one of the best structured rosters of the last 10 years.

We had the ridiculous volume-shooting and bucket-making marvel that was (and is, overseas) Russ Smith; that veteran point guard everyone enjoys in Peyton Siva; the stereotypical white “shooter” with Luke Hancock; Gorgui Dieng was feeling himself come March; and so on.

We didn’t even mention really good players like Chane Behanan and Wayne Blackshear, nor the entire Kevin Ware stuff.

To know how good this team was in a nutshell, then-freshman Montrezl Harrel, who would wind up being a 16-9 guy in his last season with the Cardinals, played less than 16 minutes per game for Louisville that season.

For now, this title still counts until someone from the FBI/NCAA goes to wherever Count Rick Pitino is lurking, and rips it from his undead hands.

This team lacked NBA-level guys like the Duke team ranked lower than it, but it won far more games. By the time the season was over, Coach K — another immortal coach ala Rick Pitino — led the Blue Devils to a 35-5 overall record with his best offensive players being Jon Scheyer and Kyle Singler.

Not exactly names that echo throughout history in the same ways as an Anthony Davis or pretty much anyone else.

This team had two members of Clan Plumlee on the roster, Miles and Mason, which really seems unfair if we are being honest. Having a Plumlee on your college basketball roster is the equivalent to using PEDs in baseball.

With Nolan Smith being the best overall player on this Duke team, Coach K rode a top-heavy offense, coupled with a good defense, to a championship.

Only three players for Duke that season averaged in double-digits. Something called a Brian Zoubek was fourth on the team in scoring.

If I’m being honest, these last three were the easiest to slot.

The Tar Heels were the preseason No. 1 and lost only four games the entire season. As important to note, the losses came by an average of only four points. That means that, even in defeat, North Carolina was always in it, to win it.

North Carolina won their six NCAA Tournament games by an average of 21.2 points. For those bad at math, that is good.

Ty Lawson averaged 16.6 points and 6.6 assists. He had 21 points, 6 assists and 8 steals in the 89-72 win that secured Roy Williams? second national championship. And he wasn’t even UNC’s best player that season. That nod goes to Tyler Hansbrough, who has seen his insane numbers get lost to time. Well, that and the fact it is hard to fondly remember a dude in a nostalgic way when his most memorable offensive plays were him hurling around elbows.

While Psycho T won most of his individual awards the season prior, he averaged 20.7 points and 8.1 rebounds per contest.

Using data in this format isn’t ideal, but this nugget is just too difficult to ignore. The Jayhawks finished the 2007-08 voyage with an adjusted efficiency margin of 34.39, one of the highest of any national champion in the KenPom era (dates to 2002).

While this team is likely most remembered for Mario Chalmers becoming a hero, it was a rare one-seeded NCAA Tournament team that had to beat two other one-seeds in the Final Four to win the Big Dance. That’s a lot of winning against a lot of great teams.

Of course, this wasn’t just a team being carried by Chalmers or anything. Seven players on the 2007-8 Kansas roster eventually made their way to the NBA. Not even the Brooklyn Nets have seven NBA players on its roster.

I kid, Brooklyn. I kid because I love… and because it is only technically untrue.

This team was banana-pants, Batman.

Going 16-0 in the SEC, this version of the Wildcats only lost twice that season (by a total of eight points).

Anthony Davis, Michael Kidd-Gilchrist, Doron Lamb, Terrence Jones, Marquis Teague, and a few other future pros comprised this roster. It was a roster that basically won the NCAA Tournament without much push back, to boot.

Kentucky’s first four wins in the NCAA Tournament were by double-digits. Then, naturally, the Wildcats beat Louisville and Kansas by eight points each.

Davis was the consensus National Player of the Year after averaging 14.2 points, 10.4 rebounds and 4.7 blocks. He was good then. He’s also good now.