Coach loses his mind and screams at player, “I’m going to f—ing kill you!” 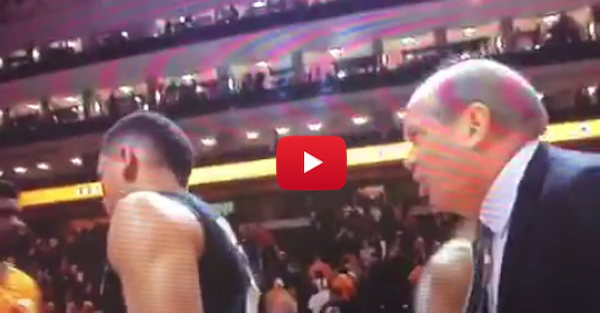 Tennessee and Vanderbilt are bitter rivals, especially when it comes to basketball. Both Vanderbilt (16-12, 6-9 SEC) and Tennessee (14-13, 6-9 SEC) have been struggling this season, so Vandy’s 73-65 win means bragging rights for them. But Vanderbilt’s Wade Baldwin took his excitement a little too far, and his coach, Kevin Stallings, lost his mind in a way you rarely see. Watch the video, and you can hear a ballistic Stallings yell, “I’m going to f—ing kill you!” Yep. He said that.

?I handled it completely inappropriately and I apologized to Wade ? and I need to apologize to our fans and the Vanderbilt administration. Having said that, and it may seem as though I?m trying to rationalize my behavior, sportsmanship will continue to be a high priority. I did not mean it in the literal sense and I?ve never touched a player in all my years as a coach. That?s not me. I will learn from this and handle this situation differently in the future.?

Coach Stallings is the best coach in America. I felt no offense to anything. We are both fiery people and that's why I chose Vandy ⚓️👇

But the rest of Twitter was not as nice about the whole exchange:

Sal Sunseri has no idea why Kevin Stallings is apologizing. Stallings was telling a bedtime story compared to Sal's practice-field vocab.

The real question: Why did Wade Baldwin think Armani Moore was the best #Vols player to mock? Stallings probably saved that kid's life.

My goodness, y'all. #Vols and #Vandy are rivals. They don't like each other. Things will happen. Don't make this bigger than it is. JMO.

Who hasn’t had a coach tell them they were gonna effing kill them from time to time? I’ve heard it more times than I can remember.

Bad language is part of the game but there is also a time & place. Like that Stallings reprimanded his player but using that language openly

is an issue. Behind close doors is one thing but that open isn't right. The kid was wrong but the issue should of been addressed in private.