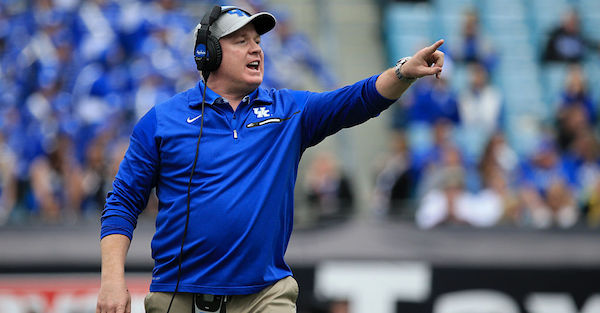 Since 1985, Kentucky has only beaten Tennessee once. That win came in 2011, and the Vols have won every game since by double digits.

However, college football analyst Danny Sheridan thinks the Wildcats will defeat the Volunteers in 2017.

"Tennessee is looking at 7 or 8 wins. I think they lose at Kentucky" – @DannySheridan1 pic.twitter.com/2QHURROKMz

Related: After leaving Tennessee for a 2nd time, former four-star QB may have found transfer destination

Sheridan isn’t alone in his prediction. SEC Network analyst Cole Cubelic believes Kentucky will finish in the top 3 of the SEC East.

Cubelic also thinks Kentucky has the edge over Tennessee at nearly every position heading into next year.

This is surprising since Kentucky is a lowly 1-32 against Tennessee in its last 33 meeting.

Mark Stoops led Kentucky to a 7-6 record in 2016, while Butch Jones has led Tennessee to back-to-back 9-4 seasons.

The Wildcats turned the corner with Stoops last season, and they will be expected to make another stride in 2017. Defeating Tennessee or Florida would be monumental for Stoops and his program.