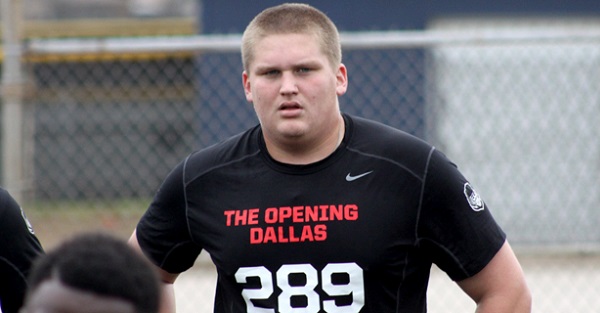 One of the rising recruits out of the state of Texas announced his commitment on Friday, and it really came as a bit of a surprise to everyone.

Offensive lineman Will Farrar (6-foot-5, 290 pound, Richmond, TX) had been gaining a lot of momentum on the recruiting trail recently, but at least for now, he has a school: Texas Tech.

Farrar had 28 total offers, including offers from Texas, LSU, and Miami. Farrar did commit to UCLA back in March, but decommitted just a month later after an unofficial visit.

The 247Sports Crystal Ball went as far as giving Texas a 73-percent chance to land Farrar, but it looks like the young lineman is heading to another Big 12 school, instead.

Farrar is the ninth commit of Texas Tech’s 2017 recruiting class. That class currently ranks No. 4 in the Big 12, according to 247Sports.