A professor, upset at the ECU band protest, planned to bring a gun to campus. Then, cops got involved. 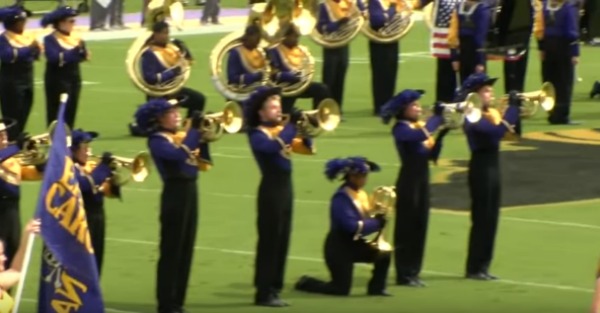 An East Carolina professor who vowed to exercise her second amendment rights and carry a gun to school in response to the school’s band members kneeling during the national anthem recently has now decided against it.

WNCTV reports that ECU police said they met with the professor, Tracy Tuten, Tuesday regarding her intention to open carry a gun on campus. When police informed her that it would be against the law, Tuten agreed that she would not follow through with her threat. They released the following statement:

“The ECU Police Department is aware of the statement made by Dr. Tuten. We have communicated with Dr. Tuten about what the General Statutes of North Carolina allow and do not allow in terms of weapons on educational property and she indicated that she understood these provisions,” said Jason Sugg, interim ECU police chief. “While I can appreciate Dr. Tuten’s intent to bring attention to Constitutional discussions, carrying a handgun on campus property in the manner in which she described is currently prohibited by state law. Based on the most recent information given to us, we are hopeful that Dr. Tuten has reconsidered her intended action.”

Nineteen members of ECU’s band chose to kneel and not play their instruments both during the anthem and at halftime of the game against Central Florida last weekend. The action was met with tremedous backlash. Fans booed the participating band members off the field; a local radio station said it wouldn’t broadcast its upcoming game; and the band director said future protests won’t be “tolerated.”

Tuten reacted by firing off an angry email to the school’s chancellor, which read in part:

I have learned that not only did you know about the band members’ plan but that you endorsed and supported it. I am probably quite minuscule in the grand scheme of advancement but I made a stand with what I had to offer. Since the band members can act on the first amendment without regard to university rules, I too want to act on my second amendment rights to bear arms.

Tuten alson told WNCTV in Greenville that she planned to carry a firearm on campus to make a point in protest, arguing “(ECU) is okay with these band members totally disrespecting the university rules, but I’m not okay protecting myself.”