Another day another award for Deshaun Watson 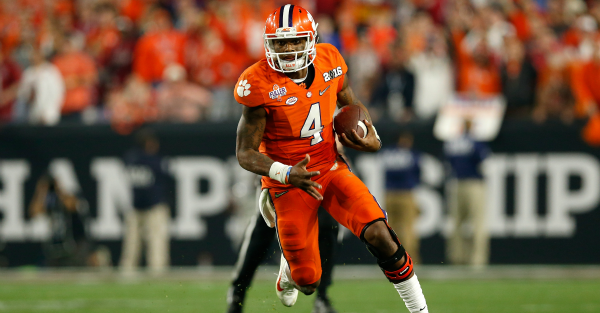 Deshaun Watson accomplished a whole lot in his sophomore campaign and accounted for over 5,200 yards of offense. He was the first quarterback to throw for 4,000 and rush for another 1,000 yards. That kind of performance won him the Archie Griffin Award and it looks like another prestigious award committee took notice of his play this year.

#Clemson’s Deshaun Watson is the winner of the Manning Award going to the top QB in college football.

According to the Sugar Bowl’s official website the award accounts for postseason play. That means all 47 of Watson’s touchdowns he’s responsible for counted as well as everything else he did against UNC and Oklahoma in the postseason. He joins the likes of Jameis Winston, Cam Newton, and Matt Ryan as winners of the award.