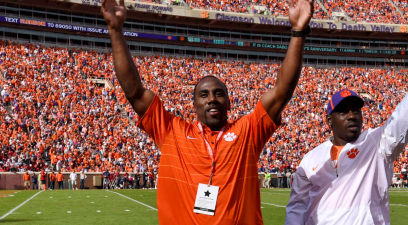 There are going to be some real hot takes in the coming days after Miami took an inexplicable loss to Pittsburgh. We’ve already got one of those as former ESPN and CBS Sports analyst Bonnie Bernstein trotted out this scenario:

With Clemson/Miami each now owning a bad loss, it’s entirely possible Canes win ACC Champ… but Clemson, *not* Miami, gets into Playoff.

Bernstein basically believes that a two-loss Clemson would somehow be better than a one-loss Miami team despite the Hurricanes beating them head-to-head in the ACC Championship Game. Not only that, but she references Penn State as a starting point. That’s a bit of a misnomer because the Nittany Lions actually won their conference last year despite the two losses.

In this scenario, Clemson would not have won their conference so there’s no comparison to be made here that makes sense. Not to mention that the selection committee would never put in a two-loss team over a one-loss conference champion, especially if there is a head-to-head game to decide which is the better team.