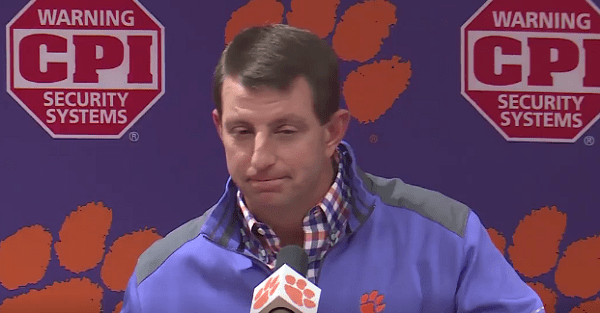 The last week of the season is known as rivalry week as most teams are playing their arch rivals — as you can imagine — that week. That certainly goes for Clemson and South Carolina as they will play in what’s known as the Palmetto Bowl while Auburn and Alabama play in the Iron Bowl.

Most people would say that the two rivalries aren’t really comparable considering the real hatred Auburn and Alabama fans have for each other. However, coach Dabo Swinney would disagree with that.

"There is no difference" – Dabo Swinney comparing the #Clemson–#Gamecocks rivalry to the Iron Bowl between #Alabama and #Auburn pic.twitter.com/c22XkveJxi

Now, of course he’s going to say that the rivalry he’s involved in is intense. To compare it to one of the most, if not the most, intense rivalries in the game of football is a little ridiculous.

In the 114 times that Clemson and South Carolina have met, the Tigers have won 68 games with the longest win streak at seven games in the series. The Iron Bowl has been played 91 times with only 10 games being the difference between Alabama being better than Auburn (with one tie in there). Because football is the only thing the state of Alabama truly cares about that rivalry is just better no matter what Swinney might think about South Carolina’s premiere rivalry.

Dabo has been involved with both rivalries as he was a player at Alabama. And that’s why he should know better than to say the rivalries are equally intense.