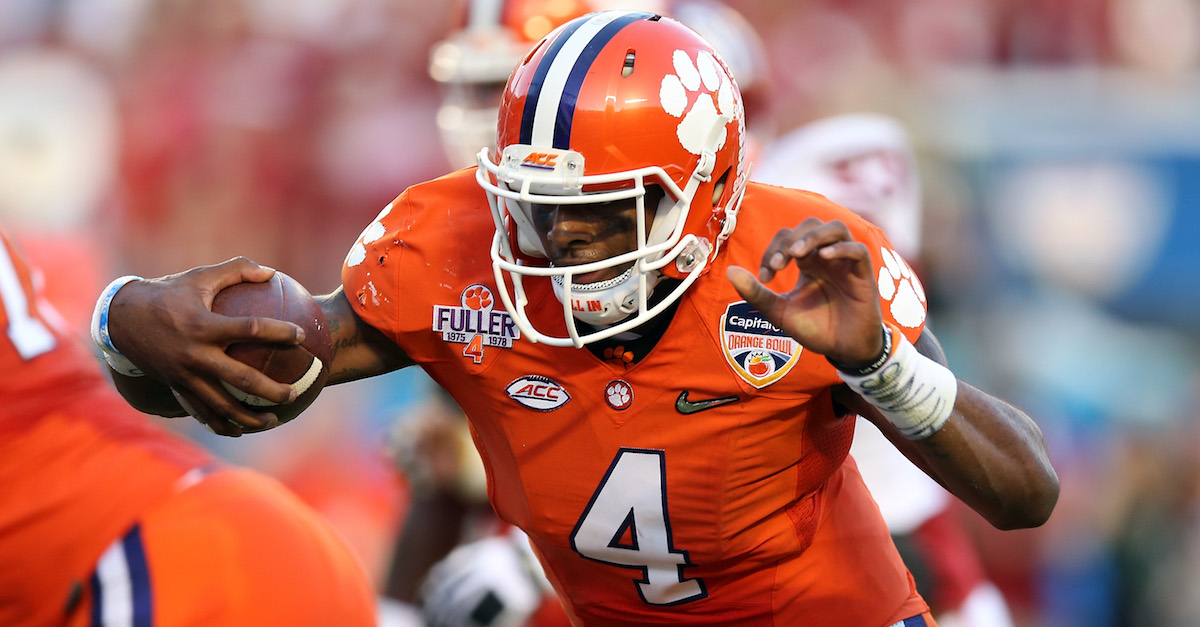 Andy Lyons/Getty Images
MIAMI GARDENS, FL - DECEMBER 31: Deshaun Watson #4 of the Clemson Tigers runs with the ball against the Oklahoma Sooners in the second quarter during the 2015 Capital One Orange Bowl at Sun Life Stadium on December 31, 2015 in Miami Gardens, Florida. (Photo by Andy Lyons/Getty Images)

The Cleveland Browns hold the No. 1 overall pick in the upcoming 2017 NFL Draft and Clemson quarterback Deshaun Watson figures to be in the mix at that spot. However, Watson reportedly did the opposite of what the Browns asked him to do in spurning the Senior Bowl and that only added to the perception that the title-winning QB does not want to play in Cleveland.

With that in mind, Watson was prompted about the topic during an interview with the NFL Network on Thursday and Josh Alper of Pro Football Talk brings word of the specifics:

?That?s wrong, false information. I talked to [Browns coach] Hue Jackson, we had a great conversation right after the national championship game and I told him, ?Hey, this is what I?m thinking about? and he understood everything. I talked with my family, my agent, my trainer, all the coaches at Clemson, and it was just best for me to go ahead and get started in the draft process. I moved to California, so it was just a lot moving from Georgia to California [to train ahead of the Scouting Combine] and then trying to go back to the Senior Bowl.?

Clemson head coach Dabo Swinney famously compared Watson to Michael Jordan in the draft process and, even if that appears quite lofty, there is a segment of evaluators that would place the quarterback at the top of the heap. Still, it isn’t as if Watson is a slam dunk choice at No. 1 given the fact that many believe he’s closer to a second-round talent and this intrigue is heating up as a result of that divide.

The Browns are infamous for botching draft opportunities repeatedly but, in the recent past, the direction of the franchise (at least off the field) appears to be headed in the right direction. How they handle Watson and others in the 2017 draft will be paramount and, at least publicly, there is no reason to believe that Watson wants to avoid Cleveland at all costs.