Another Clemson player has decided to transfer from Tigers 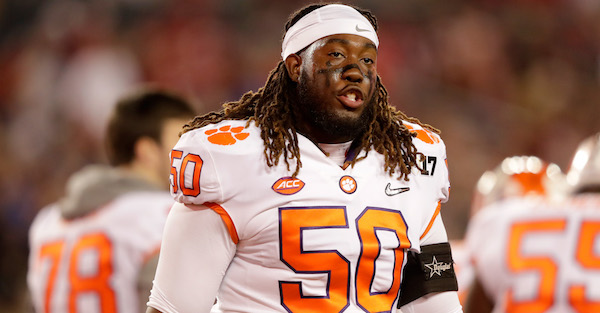 Clemson is aiming for a fourth consecutive berth in the College Football Playoffs in 2018, but the Tigers have lost several players to transfer this offseason.

Defensive lineman Jabril Robinson announced he is transferring from the program, and the redshirt junior has one year of eligibility remaining. He will be eligible immediately since he will be a graduate transfer.

Related: Yet another Clemson QB announces intention to transfer

"Clemson has developed me not only as a great football player but as an educated young man."

Leaving @ClemsonUniv with a National Championship and a college degree, we wish the best for Jabril Robinson. Thank you, 5️⃣0️⃣!

“The past four years at Clemson University have been a blessing to my family and me,” Robinson said. “Clemson has developed me not only as a great football player, but as an educated young man.

“I want to especially give thanks to coach (Dabo) Swinney and (former defensive tackles) coach (Dan) Brooks for giving me the opportunity to play at this level. As a Clemson graduate, I have accomplished so much here as a player and as a student. However, I have more I want to accomplish both on the field and in the classroom. After much thought and prayer, I have decided to further my education and athletic career elsewhere. I will forever be a Clemson Tiger and again want to thank everyone.”

Robinson didn’t make any starts, but he recorded 19 tackles as a reserve last season according to Tiger Net. He has 1.5 sacks for his career.

Robinson hasn’t announced where he plans to transfer.

The Clemson defensive line will be a strength again next season as Clelin Ferrell and Christian Wilkins decided to return to school for another year.