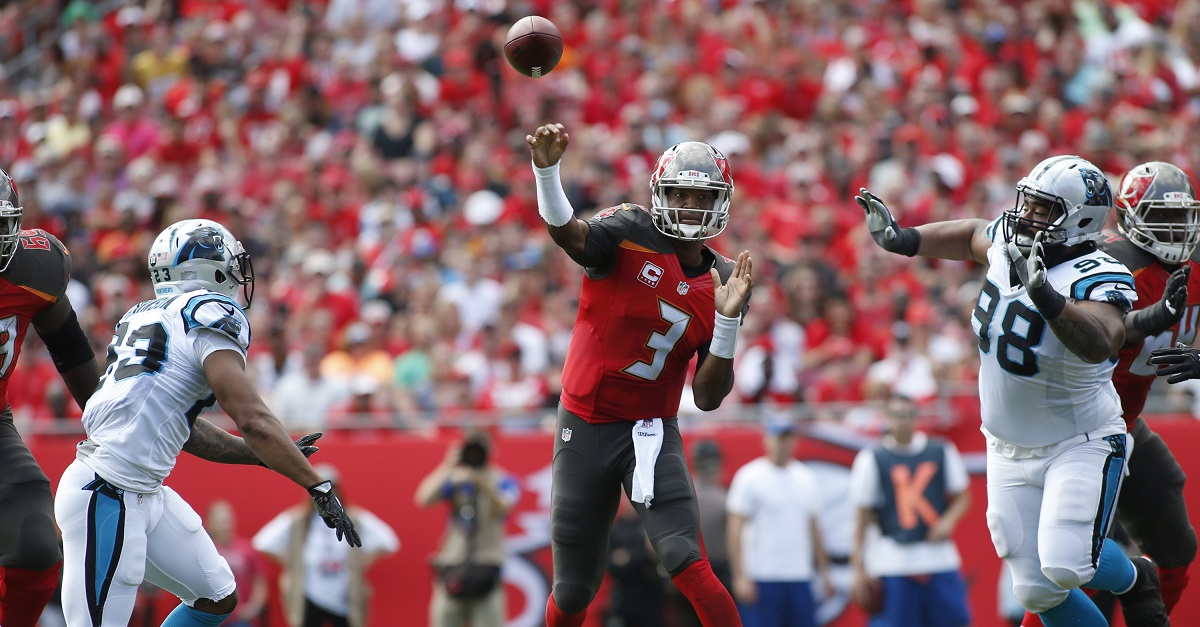 Brian Blanco/Getty Images
TAMPA, FL - JANUARY 1: Quarterback Jameis Winston #3 of the Tampa Bay Buccaneers throws to an open receiver while getting pressure from defensive back Leonard Johnson #23 of the Carolina Panthers and defensive tackle Star Lotulelei #98 during the first quarter of an NFL game on January 1, 2017 at Raymond James Stadium in Tampa, Florida. (Photo by Brian Blanco/Getty Images)

Deshaun Watson was seen by many as the most “pro-ready” quarterback in the 2017 NFL Draft and the Houston Texans thought enough of his talent to trade up in an effort to grab him. With that said, the former Clemson quarterback and national title winner will face an immense amount of pressure in his new gig. Still, at least one football insider believes he can handle it and comparisons to Jameis Winston have followed.

Stanford head coach and NFL Network draft analyst David Shaw recently spoke to Pete Thamel of Sports Illustrated and he said the following about Watson when compared to Winston.

“I’d probably put Jameis ahead of him slightly on offense. Jameis was more in the pocket, but this kid has an X-factor Jameis had too, which is, like it or not, his personality wins over a locker room. They love that guy. And Deshaun is going to do the same thing. His Day 1 in that locker room, guys are gonna say, ‘Oh there’s our quarterback. Coach, you tell me he’s not going to start but I’m following him already.’ That’s the kind of person he is.”

Within the same conversation, Shaw compared Watson to one of his former players, Andrew Luck, and he said the following about seeing Watson in person during college.

“I was fortunate to go down to Clemson two years ago and watch spring practice with Dabo (Swinney) and Deshaun because he was injured, and I got to stand next to them and he took every single rep seriously even though he wasn’t in. He knew every play. (He) relayed every single play to Dabo. Evaluated the quarterback on every single play. He should’ve done this, should’ve done that. It was like watching a coach, and this kid just finished his freshman year. (Swinney) kept telling me, this guy’s special. I spent a day around him, and there’s a presence you can’t fake.”

At No. 12 overall and with Tom Savage on board, Watson may not face the type of immediate hype that Winston and Luck encountered but he is now, officially, the savior of Houston’s offense moving forward. In short order, we’ll see if he can live up to that considerable billing and investment.