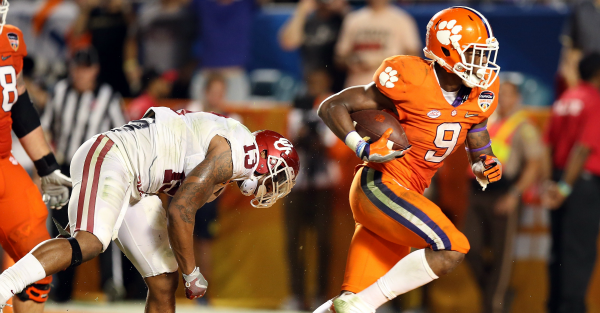 With Clemson’s season officially being over it’s time for some of the players to make some decisions regarding their NFL futures. Junior tight end Jordan Leggett has made the decision to stay at Clemson another year because he has to win a championship before he leaves. Redshirt sophomore running back Wayne Gallman has chosen to stay another year as well.

One more year won't be so bad.. #ALLIN pic.twitter.com/WSHDzU7Kkk

That gives the offense stability and a serious punch for next season when they get Mike Williams back and will hopefully have Deon Cain available as well. However, there was one big loss for this team on the defensive side of the ball. Junior defensive end Kevin Dodd declared for the NFL Draft in a statement he released through his agents at Elements Sports Group. Dodd had 62 total tackles on the year. He had 23.5 tackles for loss for 99 yards, 12 sacks, a blocked kick, and a forced fumble this season.

It also looks like safety Jayron Kearse is going pro. He had 62 total tackles, an interception, a fumble recovery, a forced fumble, and 6.5 tackles for loss.

No surprise, but Clemson S Jayron Kearse announces he is going pro.

Cornerback Mackensie Alexander has also declared for the draft and made a promise to Clemson in the process.

“After much thought and consideration, I have decided to forgo my remaining eligibility and declare for the NFL Draft,” Alexander said in a statement. “While I may now be leaving to pursue an NFL career, I will always be a Clemson Tiger and I will return to Clemson to finish my degree.”

Alexander sat out a lot of the championship game because of a serious hamstring injury he suffered. He still had a strong season and should have a lot of scouts checking him out leading up to April’s draft.