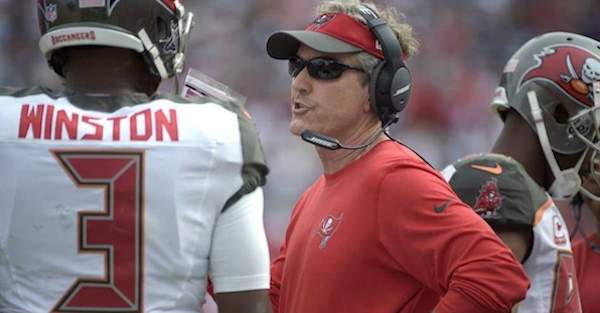 Photo via the Associated Press

Former Florida State quarterback Jameis Winston had a little bit of a leg up when it came to his preparation for the National Football League, and part of that is due to the Florida State offense. Jimbo Fisher’s system is a pro-style one, and new Tampa Bay Bucs head coach Dirk Koetter, who will coach Winston in his second year, had a chance to look at the system from a playbook perspective. In an interview with ESPN’s Mike and Mike, Koetter said that he was very impressed with the type of system that the ‘Noles run under Fisher.

Koetter was hired as Tampa Bay’s coach after the team fired Lovie Smith at the end of last season. Koetter was the Bucs’ offensive coordinator last year, where Tampa saw the most prolific offense in Bucs history — it totaled 6,014 yards during the 2015 season. Winston also became the third rookie in NFL history to throw for more than 4,000 yards.