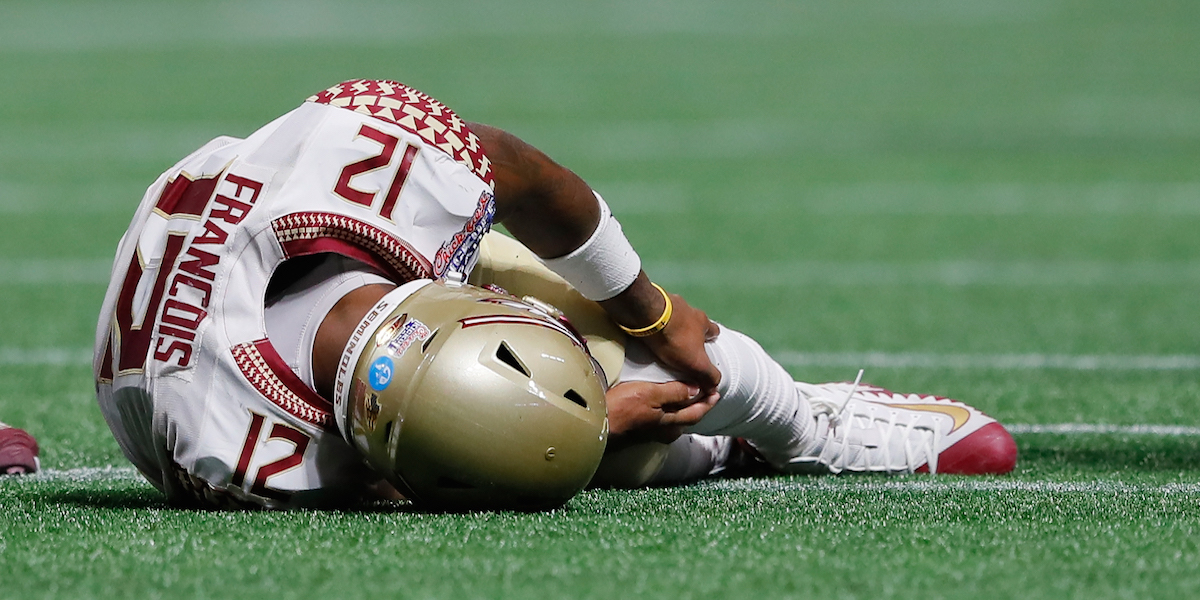 It was all good just a week ago.

Florida State entered the 2017 season with a No. 3 overall ranking and high expectations. Saturday’s game against top-ranked Alabama was one with early national championship implications.

The outcome, however, wasn’t quite what the Noles hopeful had in mind. Alabama defeated FSU, 24-7, in dominant fashion. However, the Noles suffered an even bigger loss than the score would indicate.

Quarterback Deondre Francois went down with a knee injury during the fourth quarter of Saturday’s game after being sacked by Alabama’s Ronnie Harrison. On Monday, head coach Jimbo Fisher confirmed that Francois would miss the remainder of the season.

4-7 month recovery for Francois is what Fisher was told.

Obviously, this is crucial in Florida State’s quest for a national championship. Francois showed promise during his first year as the Noles’ starting quarterback last season.

As a redshirt freshman, the former 4-star prospect threw for 3,350 yards, 20 touchdowns and seven interceptions, while also recording 198 yards and five touchdowns on 108 rushing attempts.

Many expected Francois to be even better with an additional year of experience, as well as a talented supporting cast. Instead, he’ll have to wait until 2018 to lead the FSU offense.

Now the focus turns to Blackman, who is just a few months removed from graduating high school. Francois’ injury and Saturday’s loss don’t necessarily mean that the Noles are out of national contention or an ACC title, but it will be an uphill battle.

Let’s acknowledge that FSU is the only preseason top-4 team to start its year at 0-1. That alone creates a disadvantage and has the Noles under the radar for now as the focus shifts to undefeated teams. It doesn’t help that FSU must compete in a tough conference in order to win its way back into contention.

Those are the obvious threats to the Seminoles’ run toward a conference championship, however, there are numerous others, including Virginia Tech and North Carolina. Several ACC teams have capable defenses that should be able to rattle a true freshman quarterback, especially if Florida State’s offensive line continues to struggle as it did against Alabama.

But let’s not forget that a big reason FSU was picked as a preseason favorite to make the College Football Playoff — its surplus of talent, especially on the defensive side of the football. Many have called this year’s Noles defense one of the best in program history.

While that’s yet to be proven, there’s no denying that there is talent across the board, which should make Blackman’s transition easier. Jimbo Fisher could simplify the offense based on the freshman’s strengths and weaknesses. But it’s still too early to assume anything until we actually see Blackman play.

Again, it’s hard to predict that the Seminoles will be as good with the true freshman as they would have with Francois, who could have been the conference’s best returning quarterback. But let’s not overlook FSU this early in the season given its talent at other position. While a national title seems like a pipe dream after falling to 0-1, a strong showing in the ACC could be enough to propel the Noles back into the playoff picture.