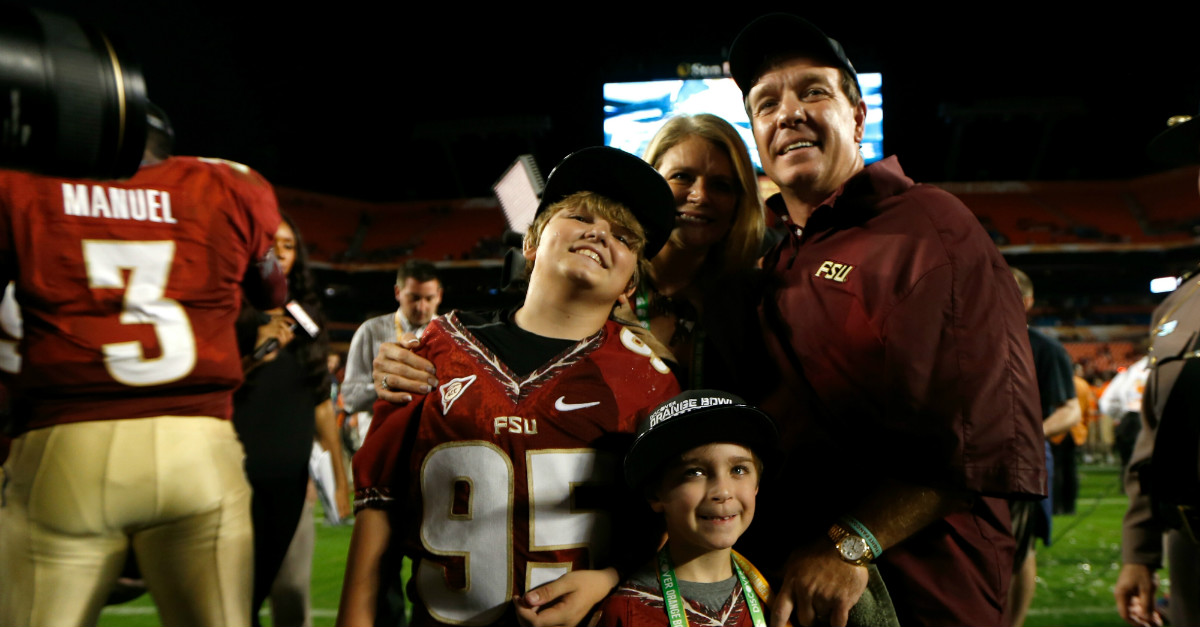 On Thursday, Florida State head coach Jimbo Fisher and his wife, Candi, separated and are working on terms for a possible divorce, according to the Tallahassee Democrat. The couple has two sons together, Trey and Ethan, the latter has a rare blood disorder called Fanconi Anemia. The couple established the Kidz1stFund in 2011 after Ethan was diagnosed with the disease.

Rumors are swirling on why the couple is getting a divorce. Some fans on message boards and Twitter are saying it has to do with Candi cheating on Jimbo with former Gators wide receiver Taylor Jacobs. Here’s what one message boarder posted:

Because of these awful rumors that are unconfirmed, fans have been insulting her on Twitter. It’s not pleasant. Here’s what some are tweeting at her:

@canfish16 went from jimbo to jumbo. Now she just a bimbo, dumbo.

@canfish16 Huge Gator fan here…I was just wondering if Taylor Jacobs has a Twitter @ handle? He was really one of my favs growing up. Thnx

@4scotttaylor @canfish16 @VISITFLORIDA I will spread the word just like @canfish16 spread them legs for Taylor Jacobs.

@canfish16 @Kidz1stFund heard you're going after Jimbo for support & alimony now, huh? LOL- I guess it beats working for a living, right?

@canfish16 Was it worth it?

@dimplesAng_ @canfish16 I'd be a nutcase if my wife cheated and the whole nation knew. Just bad . .. imagine the trash talk in Gainesville

@dimplesAng_ Well we know that @canfish16 loves black men on and off the field.

I played you some songs @canfish16 😂 #brownsugar

Got no sympathy for what's being sent your way @canfish16 #smh ..

@canfish16 the fact you did what you did…. Smh pic.twitter.com/F7Wd4cLdBZ