In recent years, the names of sports teams' mascots have come under fire, particularly professional sports teams such as the Cleveland Indians or Washington Redskins, which used mascots with the likeness of indigenous peoples (they both have since moved on from those names for obvious reasons).

But there is one that has a strong history with the support of their namesake. That's the Florida State Seminoles. Because of their relationship with the Seminole Tribe of Florida, FSU was able to create one of the most recognizable symbols and traditions in college football: Chief Osceola and Renegade. To this day, they're able to keep them as part of the program because of the working relationship the school has with the tribe.

How Florida State Became the Seminoles 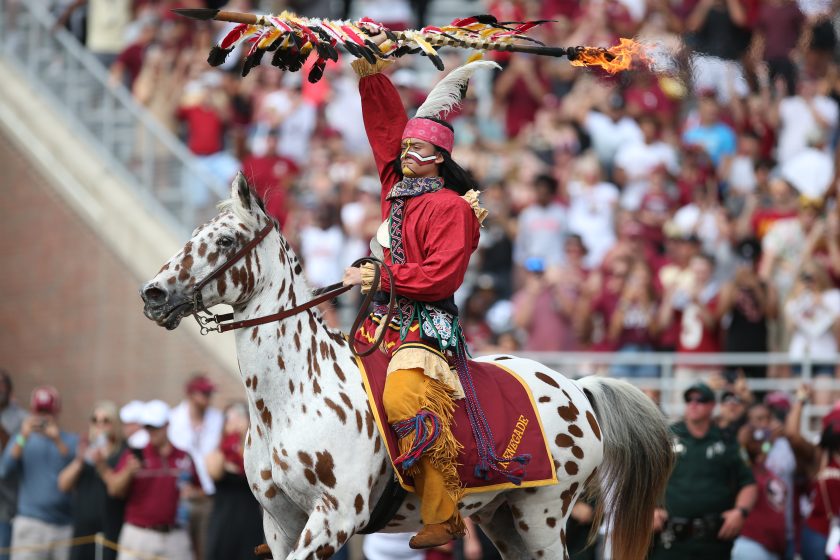 In 1977, Florida State University alum Bill Durham introduced the idea of creating not just a mascot, but a tribute to the tribe the school chosen as their nickname. And so Bobby Bowden's wife, Ann, helped implement the idea.

Durham went to the Seminole Tribe of Florida tribal council and not only received their blessing on the idea, but their help in creating the regalia that Chief Osceola would wear while riding Renegade. Without the support of the tribe itself, this tradition, along with the university's use of the Seminole name, would have ended long ago.

Florida State previously had "Sammy Seminole" but retired him in 1972 because he was offensive and insensitive.

The name Osceola comes from one of the leaders of the Seminole people during the second Seminole Wars in Florida.

Chief Osceola and Renegade made their iconic debut on a game day against Oklahoma State on September 16, 1978. Osceola led the football team onto the field riding his famous Appaloosa horse and throwing a flaming spear into the ground at midfield.

Who Dresses as FSU's Chief Osceola?

Osceola and Renegade lead the charge onto the field at Doak Campbell Stadium for every home football game and homecoming. They have even done so for the National Championship Game on two occasions, first in 1993 for the Orange Bowl and then again 20 years later in 2013 for the Rose Bowl.

Durham oversaw the tradition from the beginning until he retired in 2002, and his son Allen, who served as Osceola from 1992 to 1994, took over in his place.

There have been 18 FSU students to dress as Chief Osceola, while the Durham family supplied the school with six Appaloosa horses to play the role of the horse Renegade.

Since the introduction in 1978, there have been other ways the school has honored the Native American tribe, like the tomahawk chop and the war chant, both started around 1984. That brings us to why both the chop and chant are seen as honoring and not offensive gestures...

Why Can Florida State Keep Its Mascot? 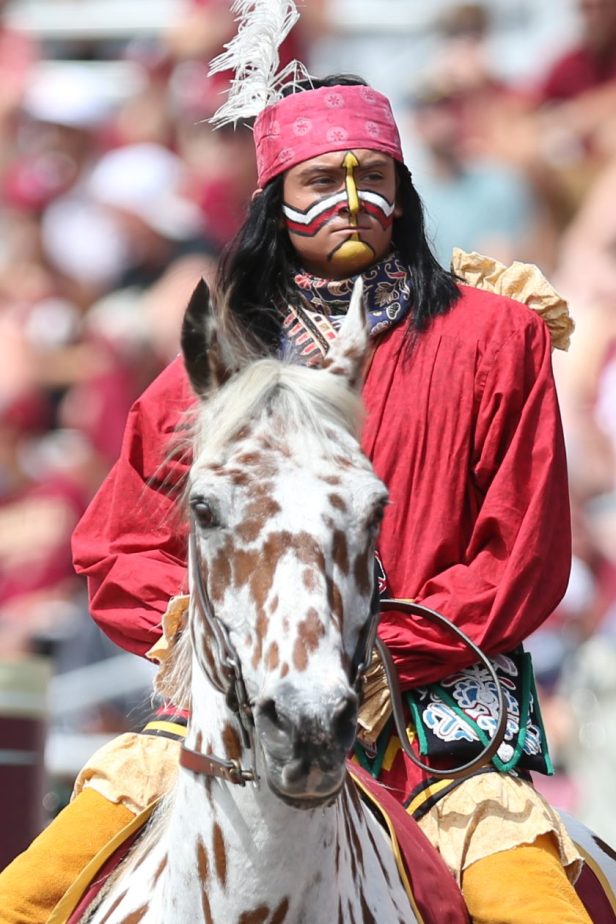 The school has tried stopping certain practices to lower the chances of offending the United States Indian population, like asking fans to refrain from wearing Native American headdresses and not using Osceola and Renegade as cheerleaders. They also refer to them as their "school symbols" and not the actual Florida State team mascot.

"Florida State University's official use of the Seminole name is different from other names in that it does not perpetuate offensive racial stereotypes nor is it meant to diminish or trivialize any Native American or indigenous peoples. Instead, it is used with explicit tribal permission and involvement to honor and promote the Seminole Tribe of Florida's unconquered history and spirit that persists to this day," Elizabeth Hirst, FSU's chief of staff and liaison to the Seminole Tribe, told the Tampa Bay Times in 2020.

Ask the Seminole Tribe, and they'll tell you similarly.

"The Tribe views the relationship as a multi-dimensional collaboration that provides meaningful educational opportunities and other positive outcomes," tribe spokesman Gary Bitner told The Times.

Does FSU Pay the Seminole Tribe to Use These Symbols? 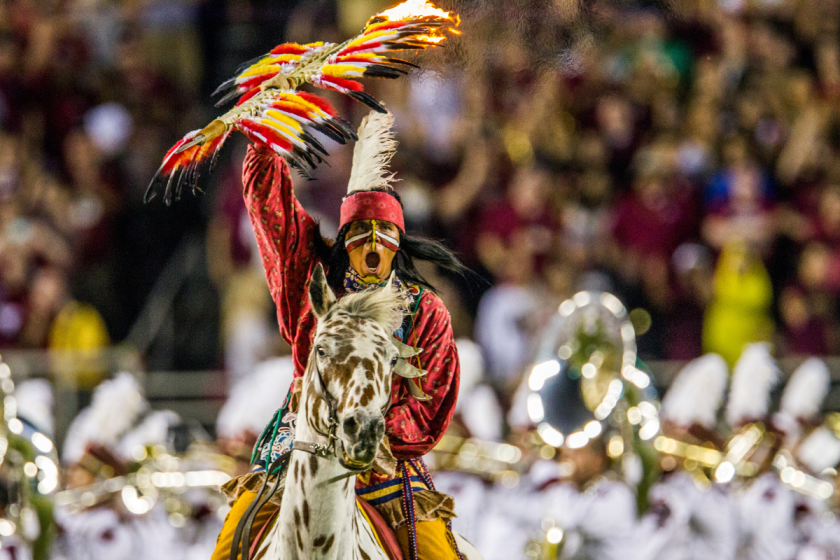 No, but the tribe does benefit in other ways.

Examples of those benefits include FSU giving opportunities to Seminole Tribe high school students and encouraging them to apply for admission. The school also spreads the history and culture of the tribe. Lastly, because many Florida government officials are FSU graduates, they work closely with the tribe to "clean up the Everglades" and "improve the roads the lead to our reservations."

Not everyone enjoys the use of American Indians as a mascot or nickname, though. The Washington Redskins of the NFL have had much more trouble with their name because they don't have the ties to the Seminole Tribe like FSU, so much so that they rebranded to the Washington Football Team before becoming the Washington Commanders. The Cleveland Indians also changed their name to the Cleveland Guardians.

The Seminole Nation of Oklahoma gave the school issues, but FSU received continued support from the tribe in Tallahassee and even from the NCAA after being warned in 2005 about their use of an Indian as a mascot.

As of now, Florida State University continues to use the school's iconic symbols.

MORE: Doak Campbell: Who is the Florida State University Icon?