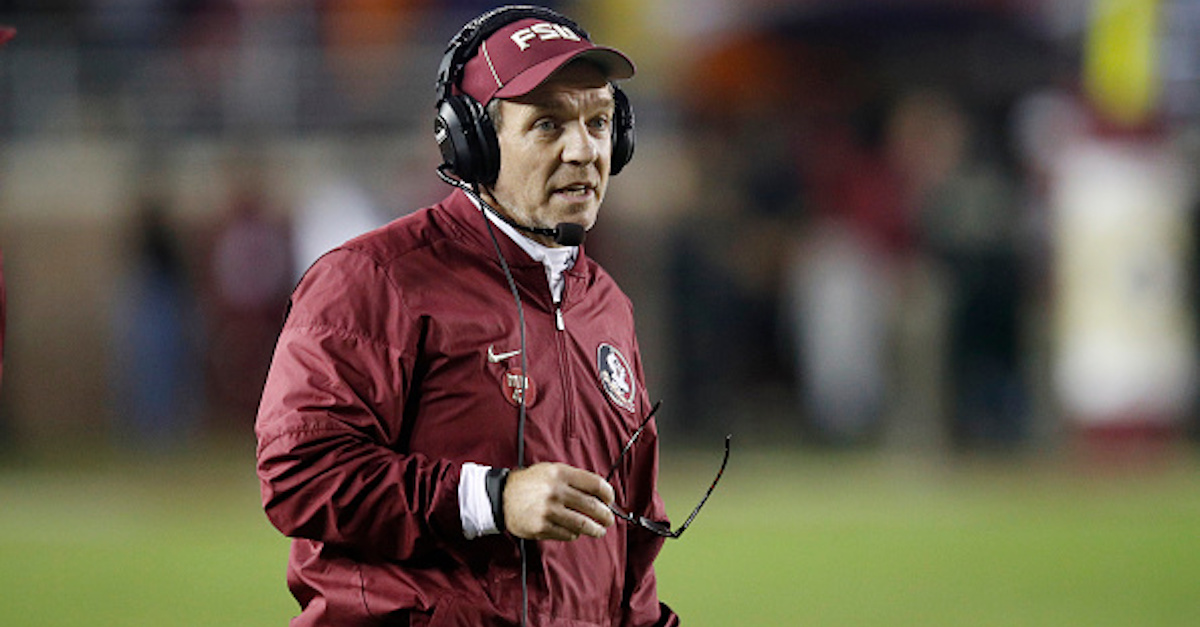 The Florida State Seminoles still have another game to play within the confines of the 2017 season, as the program famously re-added a clash with UL-Monroe this weekend in order to provide an opportunity to reach a bowl game and, by extension, gain valuable practice time. However, the majority of attention in Tallahassee is not focused on the field right now, as rumors continue to swirl around Jimbo Fisher and a potential ejection toward Texas A&M, with Oregon’s Willie Taggart in the cross-hairs as a potential replacement.

With that as the backdrop, the ‘Noles are now dealing with a different but related issue, as the incoming 2018 recruiting classes is being directly affected by the turmoil. Chris Hays of the Orlando Sentinel brings word that Florida State lost three committed prospects within a four-hour time period on Wednesday and, by extension, that class was docked significantly in recruiting rankings.

Of course, it should be noted that FSU could re-add the players if things stabilize but two prospects from IMG Academy (Houston Griffith and Verdis Brown) have decommitted and they are joined by Bossier City (La.) safety prospect Israel Mukuamu.

Please respect my decision…got to do what’s best for me! pic.twitter.com/MoEeDnktxC

I have decided to decommit from Florida State University and reopen my recruitment.

I’ve decided to reopen my recruitment.

Mukuamu is a three-star safety out of Louisiana. The 6’5″, 187-pound prospect has offers from Indiana, South Carolina, Georgia and Florida among others.

Brown is a fourt-star 6’3″, 294-pound offensive guard from Chicago, Illinois. He has offers from Illinois, LSU, Ohio State, Oklahoma and others.

The biggest loss is Griffith, at least from a rankings standpoint, and the talented defensive back currently ranks as the No. 60 overall player in the 2018 class according to the 247Sports composite. He is a four-star prospect out of Bradenton, Florida, who has big-time offers from Notre Dame, Alabama, Florida, Georgia, Michigan and others. He committed to Florida State less than two months ago.

While Florida State still has plenty of talented recruits on board for 2018 and beyond, this type of mass exodus is a terrible look for the program and it underlines just how brutal this kind of uncertainty can be in late November. Stay tuned.