Our thoughts are with Miami’s QB, who played with a heavy heart in the Hurricanes’ biggest win of the year 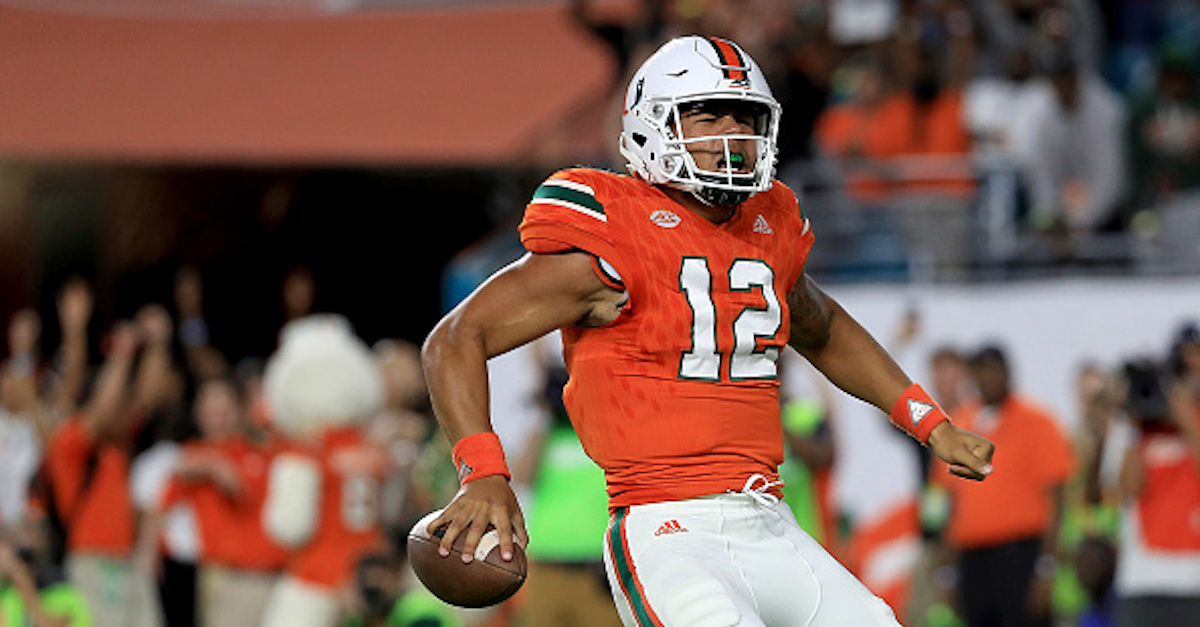 Malik Rosier was a stud for the Miami Hurricanes in their 41-8 win over No. 3 Notre Dame.

It was a huge win for the Hurricanes, who were ranked No. 7 heading into the contest, and the win propelled them up to No. 3 overall in the recent AP Polls. Currently, a College Football Playoff contender, Miami has a very real chance at the National Championship this reason and Rosier has been a big reason why.

His play against Notre Dame was a defining moment for him as a junior now in the national spotlight, but the game was even more defining when learning what Rosier had to endure before it.

According to reporting from ESPN, the Miami quarterback was playing with a lot on his mind against the Fighting Irish. On the Monday before the game, the Mobile, Alabama product had learned that his father was sent to the hospital after suffering a stroke — a stoke that caused him to lose all feeling on the left side of his body.

Here’s how Rosier described those emotions, per ESPN:

“It’s one of those things that really changes how you look at life,” Rosier told ESPN. “My life was 8-0 as a quarterback, everything was going fine, and then you get that news and you realize [all that] means so much, but it’s not everything. You have to take account of the people that are in your life and don’t take them for granted.

“I could have woken up Monday morning and lost my dad.”

The good news for Rosier, and his father is that things have improved, but it as touch and go for a while, per the report:

“It was scary,” Eli Rosier, who was released from the hospital last Thursday, told ESPN. “It was a wake-up call, I can tell you that. I’m pretty much a miracle because I came back with about 85 percent of my strength back on my left side.”

Rosier had to prepare for the Notre Dame game while his father battled back to health, and the quarterback humbly admitted that it was tough to focus. In fact, he didn’t even want to tell his coaches about what happened, but ultimately, both father and son prevailed.

The younger Rosier was tremendous for the Canes against Notre Dame, completing 15-of-24 passes for 137 yards and a touchdown, while also throwing for six first downs. Rosier also rushed nine times for 44-yards and one touchdown,

Malik Rosier has been making winning plays for Miami all year. Chalk another one up under “big time” #NDvsMIA pic.twitter.com/vdJCLUOCTd

Miami is currently on top of the ACC Coastal. The Hurricanes have games against Virginia, Pittsburgh, and No. 2 Clemson — in the ACC Championship Game — remaining.