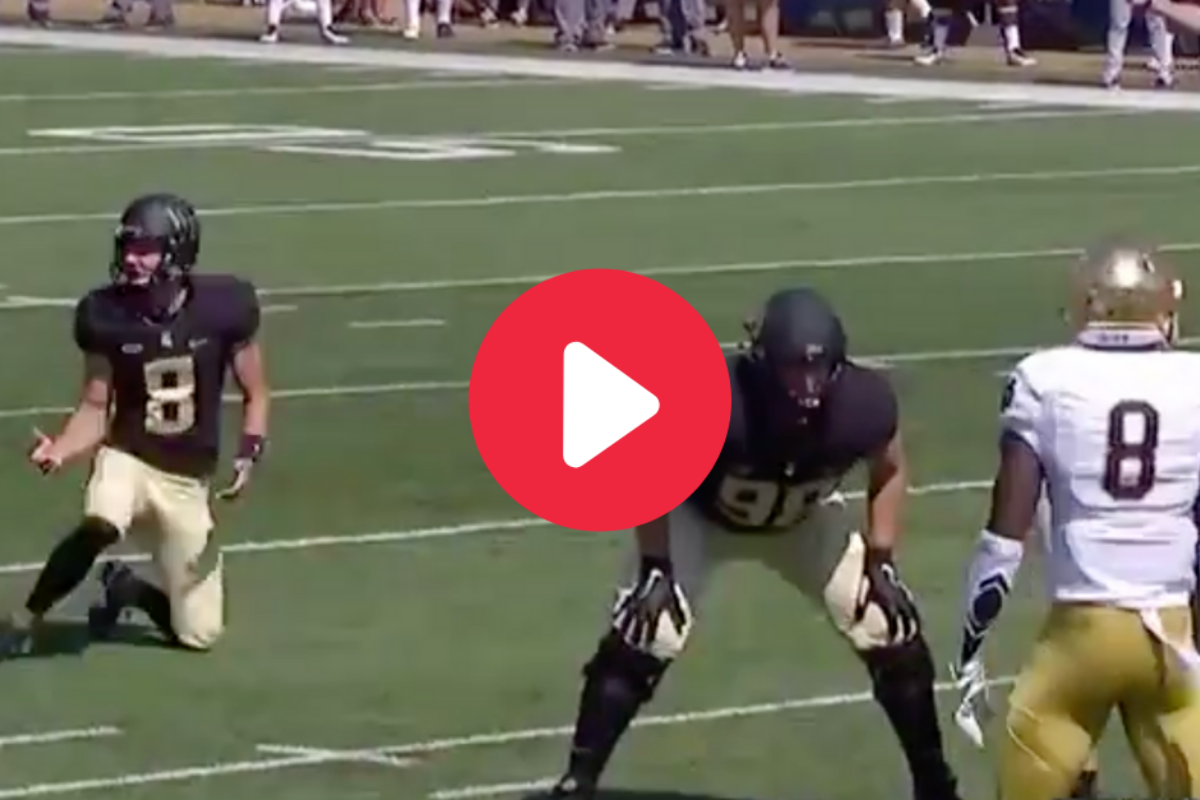 In order to have a successful field goal attempt, a team must need a placekicker. Sounds simple, right? Wake Forest kicker Nick Sciba completely forgot about that.

As the Demon Deacons lined up for a 38-yard field goal in the first quarter against No. 8 Notre Dame at BB&T Field in Winston-Salem, North Carolina, only 10 players took the field.

Holder Dom Maggio looked around, frantic and confused, but Sciba was nowhere to be found. He was stretching on the sideline before realizing it was already time to go in.

Luckily, Sciba figured it out, and there was enough time left on the play clock to get the kick off and maybe give the Wake Forest Demon Deacons an early first half lead over a nationally-ranked power.

The result? Of course he hit it off the left upright. What else?

He still got on in time, but of course, he missed the FG. pic.twitter.com/mkIIQKKhVc

RELATED: Kicker Banks Field Goal Off Both Uprights, And Somehow Makes It

The whole sequence is pretty bizarre. When was the last time a college football kicker just forgot to run onto the field for a field goal? Have you ever seen a holder so confused as he searches for the kicker? Could there be a worse blunder for a freshman specialist to make?

Of course, head coach Dave Clawson let him have it after that. The broadcast cuts before we can see the full conversation, but you can tell he’s not happy:

A 5-foot-9, 185-pound kicker from Clover, South Carolina, Sciba was ranked the No. 5 kicker in the country, according to the 247Sports Composite. That Saturday was just not his day at all.

Sciba went 2-for-4 on field goals in the 56-27 loss to the Notre Dame Fighting Irish, including making a career-best 39-yard field goal early in the second quarter, and converted all three extra-point attempts.

In the first four games of his freshman campaign, Sciba was 8-for-11 on field goals while making all 15 extra-point attempts after touchdowns in games against Tulane, Towson, Boston College and Notre Dame.

There was plenty of time for Sciba to redeem himself throughout his career in the Atlantic Coast Conference (ACC) under head coach Dave Clawson, but back then — before he set an NCAA record for most consecutive field goals on a rainy night against the Duke Blue Devils in the 2019 regular-season finale — he was definitely that guy in school history who forgot to head onto the field with the rest of the Deacons special teams unit.