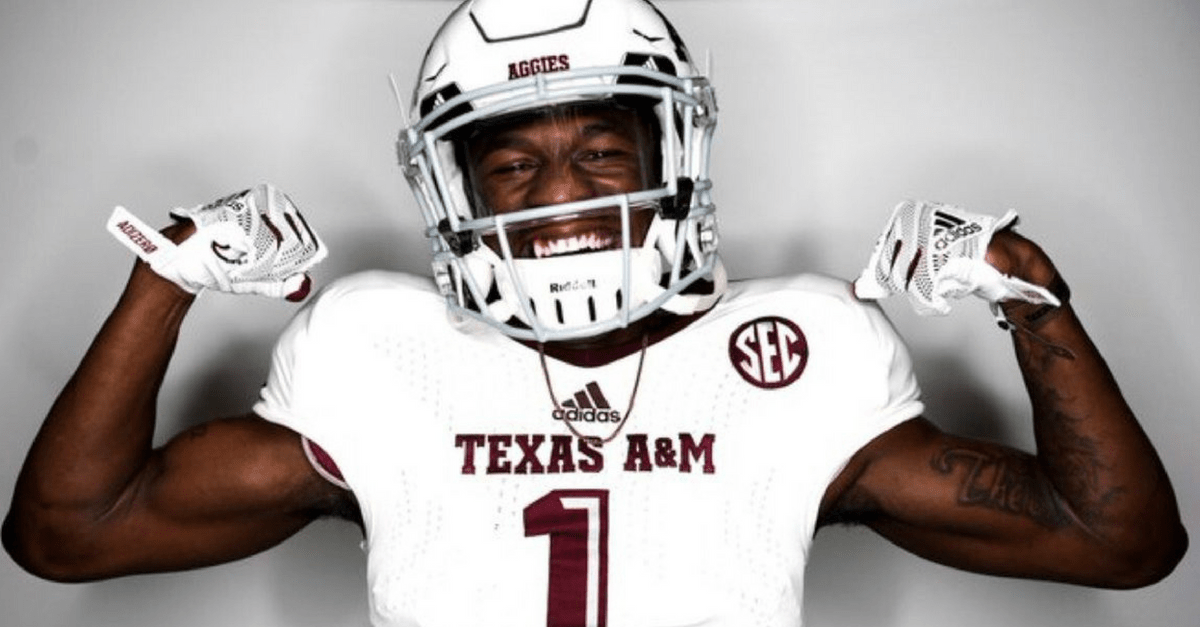 Texas A&M already had one of the best recruiting classes in the entire country and it just got another big-time boost on Tuesday with the re-commitment of Houston Madison (TX) defensive back Bobby Wolfe.

The 6-foot-1, 180-pound cornerback already pledged to the Aggies in February before opening up his recruitment. He chose Texas A&M over other finalist and SEC foe Arkansas after fielding offers from the likes of Baylor, Florida, Georgia, Houston, Louisville, LSU, Mississippi State, Nebraska, Oklahoma, Ole Miss, Oregon, Tennessee, and Texas, among others.

This time, the four-star prospect for 2019 is 100-million percent committed to playing in College Station next season and made the announcement at The Opening in Frisco, Texas.

Wolfe might not be the the highest ranked high school prospect in the Aggies’ 2019 recruiting class, but the timing of the verbal commitment sure got Texas A&M cornerbacks coach Maurice Linguist fired up.

With size, length, and 4.5-speed, Wolfe had also committed to Ole Miss at one point in time before backing away after head coach Hugh Freeze was dismissed.

Regardless of the past, however, Wolfe is set to play for Texas A&M and becomes the 20th member of its stellar 2019 recruiting class under new head coach Jimbo Fisher.

Most importantly, it gives the Aggies more firepower in the secondary. They already secured two in-state products in coveted Dallas Bishop Dunne (TX) safety Brian Williams and Waxahachie (TX) safety Demani Richardson. Adding Wolfe is another piece to make this arguably the best secondary class in the entire country.

Williams, a 6-foot-1 beast who is highly ranked on all recruiting services, had plethora of interest from the top programs in the country, including offers from 10 other SEC schools, while Richardson fielded offers from the likes of Alabama, Arkansas, Georgia, Tennessee, and Texas as well.

This appears to be the start of something special brewing in the secondary at Texas A&M, and landing Wolfe, one of the best cornerbacks in the Lone Star State, once and for all is a big win for the Aggies moving forward.