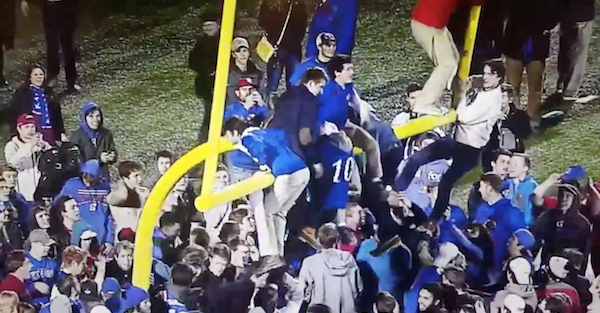 Kansas defeated Texas 24-21 on Saturday, and it was the first time the Jayhawks had beaten the Longhorns since 1938.

Kansas fans were understandably ecstatic with the victory, especially considering it was only Kansas’s second win of the season. Fans tore down one of the goalposts, although they had to exert a considerable amount of effort to get the goalpost down.

We go now to Lawrence, where pandemonium has almost broken out and they do not skip leg day. #UTvsKU pic.twitter.com/HXa3NYChL7

Kansas fans unsuccessfully trying to bring down the goalposts. pic.twitter.com/o5NcrQuBmm

Kansas coach David Beaty was hoisted on his players’ shoulders in the locker room after the game. Beaty went 0-12 in his first season as the Jayhawks’ head coach, and he has Kansas at 2-9 this season.

The loss to Kansas might spell the end of Charlie Strong’s tenure at Texas. The Longhorns need to defeat TCU to become bowl eligible.