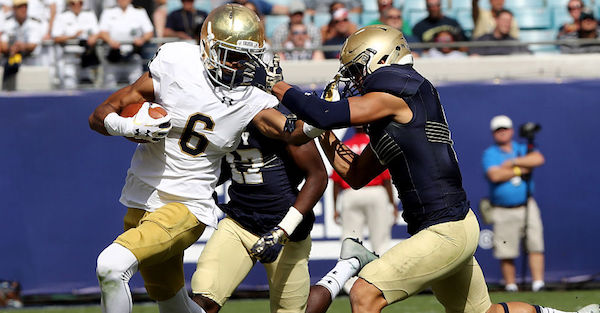 The Navy Midshipmen are losing one of their best weapons on the defensive side of the ball in Alohi Gilman. The starting safety made the announcement on his personal Twitter account Wednesday afternoon that he’s leaving the program after his breakout season in 2016-17 for the Midshipmen.

"I can't change the direction of the wind, but I can adjust my Sails to reach my Destination" -Jimmy Dean #Blessed #JustDoyou pic.twitter.com/V5MArtoz5C

Gilman’s announcement is certainly a classy gesture, and there doesn’t seem to be any ill will towards the team, which is always good to see. He doesn’t mention, however, where he’s likely to transfer to, but there is already speculation as to where he might end up.

Utah recruited him strongly in when he was in high school, so that seems to be the most-obvious destination for Gilman as of right now, but he could also go to another school that offered him in high school like Utah State, Nevada, and more.

Gilman mustered together 76 tackles along with 12 starts for the Midshipmen in 2016.