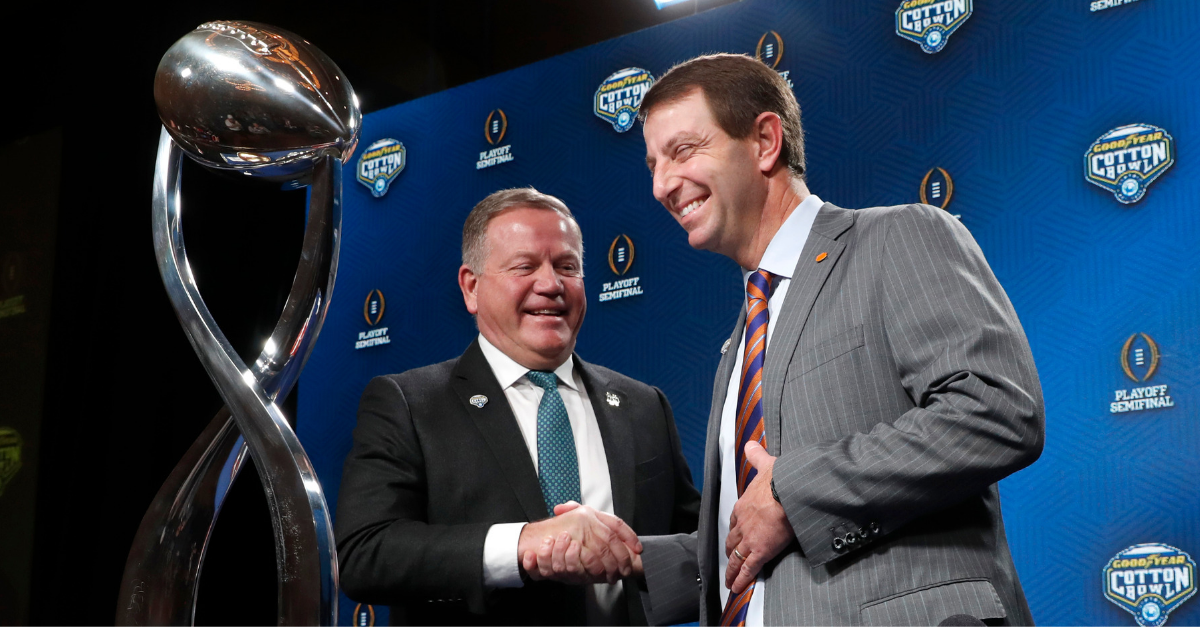 Swinney talked about how people make the program, continuity leads to consistency, and how it can’t just be about the results on the scoreboard.

“It’s a holistic approach. It’s social. It’s spiritual. It’s life skills. It’s career development. It’s every area,” Swinney said Friday during the final Cotton Bowl news conference. “And I think our commitment to that has been a big reason that we’ve been able to sustain our success because I think certain types of young people have bought into that.”

As Swinney talked, Notre Dame coach Brian Kelly listened ? a joint news conference with Swinney involves a lot of listening ? occasionally nodding his head in agreement. Swinney has built the Tigers into what Notre Dame used to be and what Kelly is trying to recreate in South Bend, Indiana.

The second-ranked Tigers (13-0) face the third-ranked Fighting Irish (12-0) on Saturday in Notre Dame’s first College Football Playoff appearance. It is Clemson’s fourth straight. The winner will play for the national championship on Jan. 7 in Santa Clara, California. Clemson has played for the title twice in the past three seasons.

“It’s easy to get distracted,” Kelly said. “And to keep that within your culture in your program requires just to have an eye on it every single day. So his ability to continue to keep his program year in and year out at the top of college football requires more than just recruiting good players.”

Kelly has been at Notre Dame for nine years and had the most successful run for a Fighting Irish coach since Lou Holtz, who won the school’s last national title in 1988. The only coaches who have won more games at Notre Dame than Kelly (81-34) are Hall of Famers Knute Rockne (105), Holtz (100), Ara Parseghian (95) and Frank Leahy (87).

Kelly has only once been this close to a national championship and after Alabama beat the Irish 42-14 in the 2012 BCS championship game, Notre Dame really didn’t seem all that close in retrospect. Just two seasons ago, the Irish went 4-8 and Kelly overhauled his staff and his approach to leading a team. The result was a huge turnaround to 10-3 last year. The foundation appears to be in place for the Irish to regularly contend for the playoff.

Still, Kelly and his team have downplayed any talk of the Cotton Bowl being a barometer for the program. Sure, the Irish are here again on the big stage, but do they really belong?

“When you go through and win week after week, you’re past measuring sticks,” Kelly said earlier this week.

#NotreDame's Brian Kelly has won the Bobby Dodd Trophy, honoring the head coach whose program embodies the award’s three pillars of scholarship, leadership and integrity, while also having success on the playing field throughout the season.

If Alabama is the current standard in college football, Clemson has been the only program that comes close.

In 11 seasons under Swinney, the Tigers are 114-30. And while that takes more than just good players, the Tigers also have plenty of those.

Running back Travis Etienne is a second-team All-American who has scored 22 touchdowns. Freshman quarterback Trevor Lawrence looks like a future first overall NFL draft pick. The best defensive line in the country features All-Americans in tackle Christian Wilkins and end Clelin Ferrell. No opponent has come within 20 points of Clemson since a close call against Syracuse in September.

“We don’t need a superhuman effort or anything, just keep doing what we’ve been doing and take care of our business and control what we can control,” said Notre Dame quarterback Ian Book, who, like Lawrence, took over as the starter midseason.

More things to know about the fourth and most important meeting between Notre Dame and Clemson.

Clemson will be without one of its key performers on its great defensive line after 340-pound tackle Dexter Lawrence was suspended for failing an NCAA test for performance-enhancing drugs. Stepping in will be senior Albert Huggins, sophomore Nyles Pinckney and redshirt freshman Jordan Williams.

“Those guys have played all year long. They have a ton of experience. They hurt for their teammate. But you best believe they’re excited for a little more opportunity for themselves,” Swinney said.

Notre Dame’s Dexter Williams missed the first four games of the season for undisclosed disciplinary reasons, but he has been one of the best running backs in the country since returning, averaging 6.63 yards per carry with a team-high 13 touchdowns.

The Irish have insisted their approach on offense won’t change with Lawrence missing, but there could be more room and opportunities for Williams to get rolling.

READ MORE: How Does Notre Dame Get Ready for Clemson?s ?Nasty? Defensive Line?