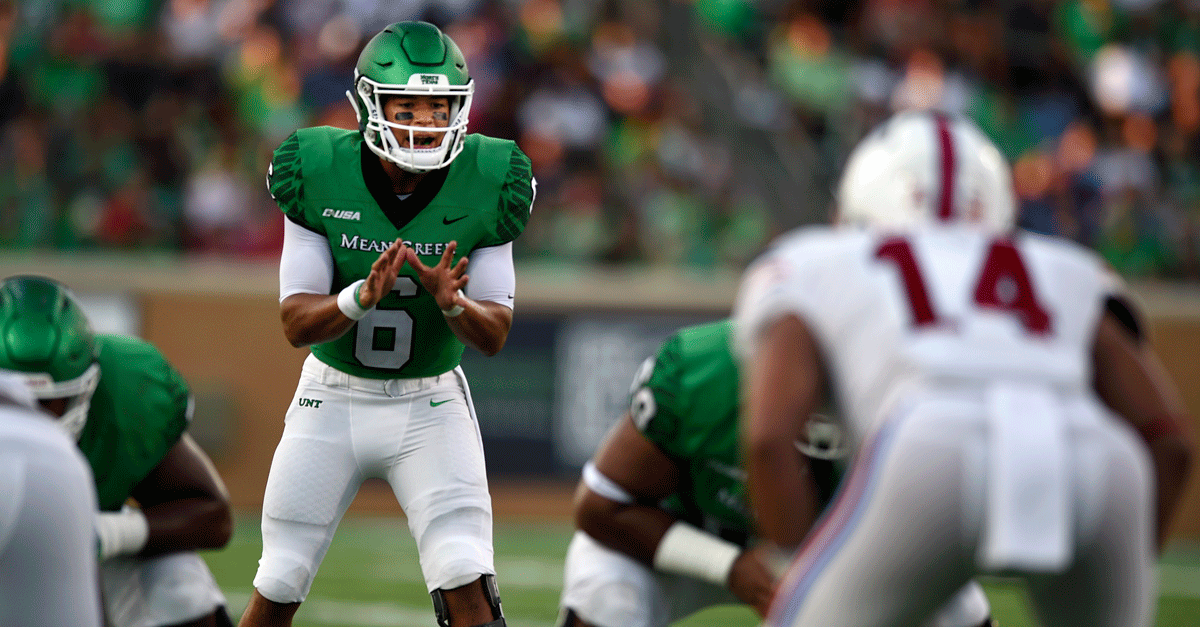 The nation’s top returning passer is off to another impressive start. North Texas’ Mason Fine hit a career-high 40 of 50 passes in the Mean Green’s 46-23 win over SMU on Saturday for the most completions in a Football Bowl Subdivision game. His 444 passing yards were a weekend best and ranks No. 2 nationally this season to the 537 by Colorado State’s K.J. Carta-Samuels against Hawaii on Aug. 25.

Fine, a junior from Peggs, Oklahoma, was Conference USA offensive player of the year in 2017 after completing 63.4 percent of his passes for 4,052 yards and 31 touchdowns. Fine has emerged as one of the top Group of Five quarterbacks. North Texas was the only FBS program to offer him a scholarship, largely because he was just 5-foot-11 and 165 pounds when he was a high school senior. He now weighs 185. Two seasons and one game into his career, he’s a 63-percent passer and already No. 5 on the school career passing yards chart (6,068).

When You Focus On Being A Blessing, God Makes Sure That You Are Always Blessed In Abundance 🙏🏽

The first three members of this season’s 200-yard rushing club are Texas A&M’s Trayveon Williams, Mississippi’s Scottie Phillips and Syracuse’s Eric Dungey. Williams went for 240 yards on 20 carries against Northwestern State before leaving early in the third quarter. It was the second-best rushing performance in A&M history behind the 297 yards Bob Smith ran for against SMU in 1950.

Phillips, a junior-college transfer for Mississippi, had 204 yards on 16 runs against Texas Tech , the most by an Ole Miss running back making his debut. Dungey turned in the fourth 200-yard rushing game by a quarterback in Atlantic Coast Conference history when he went for a career-high and school QB-record 200 against Western Michigan.

Seven teams hit the 70-point mark all last season. Three hung at least that many points on overmatched opening opponents. Fresno State’s 79-13 win over Idaho marked the most points by a Football Bowl Subdivision team since Missouri scored the same number against Delaware State in 2016.

Ohio State matched its record for points in an opener, set against Bowling Green two years ago, by beating Oregon State 77-31. Nevada beat Portland State 72-19, tying the most scored by the Wolf Pack at home since a 72-0 win over North Texas in 1991.

The bar has been set for longest plays from scrimmage. Longest pass belongs to Colorado’s Steven Montez, who connected with Laviska Shenault for an 89-yard touchdown against Colorado State. Justice Hill of Oklahoma State has the longest run, a 92-yarder against Missouri State that ended 2 yards short of the end zone.

New Mexico State punter Payton Theisler holds down the top spot on the season’s single-game punts list, having been called on 10 times each against Wyoming and Minnesota.

Theisler should be used to the workload. He’s been in the top 10 for most punts each of the last two years, having punted 80 times in 2017 and 74 times in 2016. Only three other punters had more attempts.

Stat of the Week