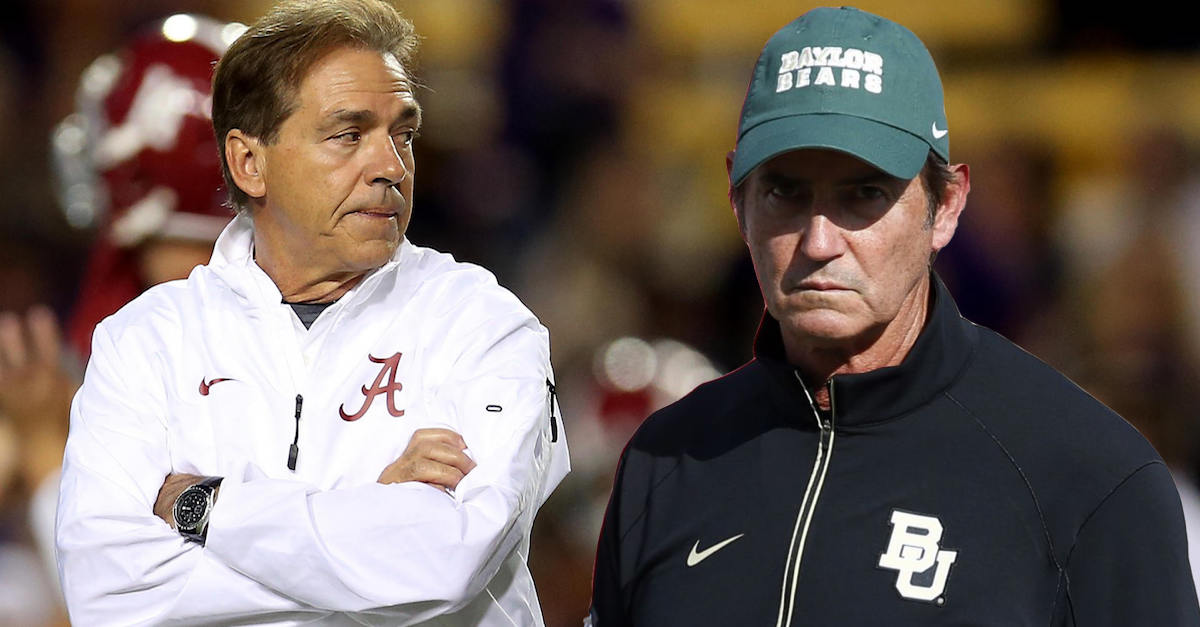 Months after he was fired at Baylor, Art Briles is having trouble finding work. For former ESPN insider Brett McMurphy, he believes there are only two schools that could take Briles in — Alabama and Liberty.

On a potential jump to Alabama:

Let me stress: I don’t think he would end up at Alabama, but if Nick Saban wanted Art Briles on his staff in some capacity – Saban has been a wayward home for some of the top discarded offensive minds in the past like Kiffin and Sarkisian – Saban has the power to bring him on board. That would never happen, because if Saban hated the distractions that Kiffin brought, having Briles in Tuscaloosa would be 100 times worse.

The school’s new athletic director is Ian McCaw, who just happened to be Briles’ boss at Baylor. When McCaw was hired at Liberty in November, Liberty president Jerry Falwell Jr. said: “Ian’s success really speaks for itself. You look at what Baylor was able to do during his tenure, it fits perfectly with where we see our sports programs going.”

(He) conveniently didn’t mention the horrific sexual assault culture on campus while McCaw was in charge of the athletic department.

Briles most recently was heading to the Canadian Football League, joining the Hamilton Tiger-Cats as an Assistant Head Coach Offense, per a team-issued release. Later in the same evening, the team made a decision not to bring Briles in, via a CFL-issued presser.

“Art Briles will no longer be joining the Hamilton Tiger-Cats as a coach. We came to this decision this evening following a lengthy discussion between the league and the Hamilton organization. We wish Mr. Briles all the best in his future endeavours.”

The Sun Sentinel originally reported former head coach Art Briles was serving as an “informal advisor” to Lane Kiffin’s FAU. Kiffin pushed back against that idea, per ESPN:

“Somebody texted me and wanted to know why I hired Art Briles, and I was like, ‘What?'” Kiffin said. “He’s absolutely not a consultant and has never been to practice or spoken to our team. That’s classic ‘somebody trying to make it a story’ because it’s Art Briles and Lane Kiffin.”

Kendal Briles, Art Briles’ son, is the offensive coordinator at FAU, serving under Kiffin’s first tenure. Here’s what was reported by the Sentienl:

Art Briles has reportedly not been on FAU’s campus. Kendal said he’s sent film to his father and Kiffin has spoken to him “a couple times.”

More from ESPN on that:

“Kendal sent his dad our spring game to let him see how he was calling plays and running the system,” Kiffin said. “I have not spoken to [Art Briles] about him watching that film. It was just his son sending his dad film so he could see what he was doing, nothing more than that.”