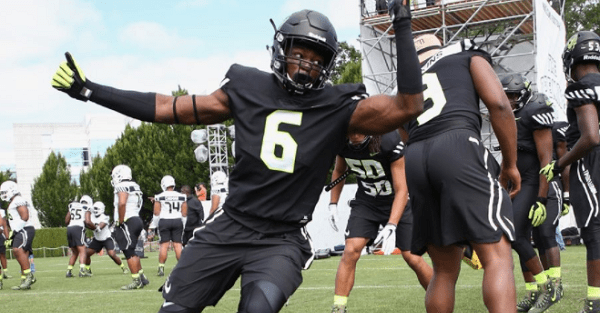 The Georgia Bulldogs will face sky-high expectations for the 2017 season and Kirby Smart’s second campaign at the helm will certainly be under the microscope. Before kick-off, though, Smart and his staff are attempting to set the program up for the future and, on Thursday, the Bulldogs picked up a commitment from the nation’s No. 3 defensive end prospect in Azeez Ojulari.

DawgNation brings word that Ojulari, who ranks as the No. 25 overall prospect in the country according to 247Sports, chose Georgia over the likes of Auburn, Clemson, Florida, South Carolina and Tennessee. The 6’4, 230-pound native of Marietta (Ga.) becomes the 11th prospect in the Class of 2018 to commit to the Bulldogs and, while recruiting services aren’t fawning over Georgia’s class just yet, this addition certainly helps in that regard.

It will also be very interesting to see how Ojulari progresses during his senior season in high school, if only because recruiting services are split on his potential. 247Sports, as referenced above, is easily the highest on the talented defensive end but the composite rankings see Ojulari as a four-star player that falls outside the top 100 nationally.

Georgia fans aren’t particularly interested in that point of view, however, as the Bulldogs just picked up a potentially important recruit and that is always a big win on campus.