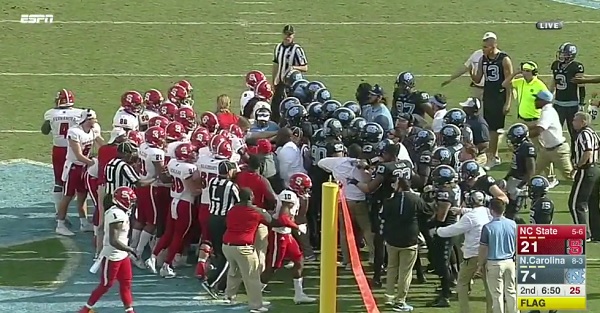 Rivalry week is always going to bring out the most intense emotions among teams and fans.

A bench-clearing brawl happened in Friday’s game between North Carolina and N.C. State after things got chippy following what was a called fumble on the field. THe situation escalated after North Carolina defensive tackle Jalen Dalton threw a punch, forcing the benches to clear out onto the field.

Several unsportsmanlike conduct penalties were called, and Dalton was ejected from the game for his actions. He probably won’t be getting any support from his coach, either, as Dalton nearly started dragging Tar Heels head coach Larry Fedora when he was trying to hold him back.