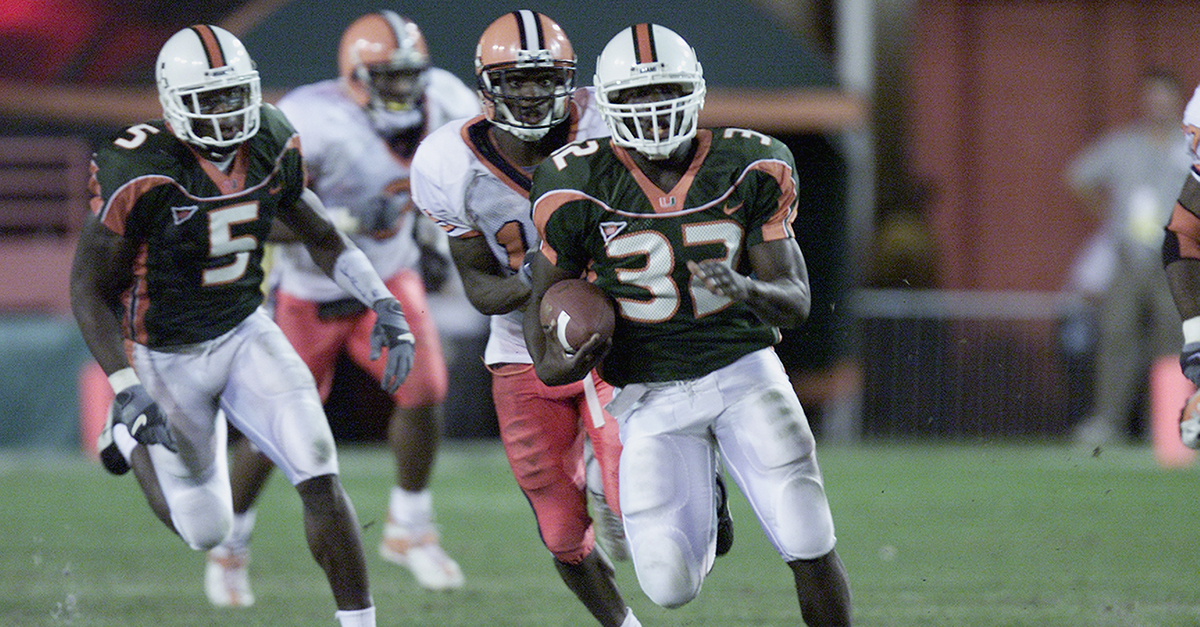 The 2001 Miami Hurricanes won the 2002 BCS National Championship by finishing the season 12-0 and beating Nebraska 37-14 in the Orange Bowl. The 2007 LSU Tigers went 12-2 and won the 2008 BCS National Championship, defeating Ohio State in the Sugar Bowl, 38-24. Now, you get to decide which of these two teams would win in a game against each other, here is the tale of the tape.

2001 Miami Hurricanes: Arguably the greatest collection of talent ever assembled on one college football team. The 2001 Miami Hurricanes had 39 (!!!) future NFL Draft picks on the roster. The offense was led by running backs Clinton Portis and Willis McGahee, wide receiver Andre Johnson, and tight end Jeremy Shockey, with the ever accurate Ken Dorsey at quarterback. The defense was just as loaded, with linebackers Jonathan Vilma and D.J. Williams, corner Phillip Buchanon, and safety Ed Reed, and the Hurricanes’ average margin of victory in the 2001 season was 32.9 — third best among the teams in the bracket. The Canes dismantled Nebraska in the National Championship game, and for those reasons are the No. 1 overall seed in this bracket.

2007 LSU Tigers: The 2007 LSU Tigers defeated Ohio State 38-24 in the National Championship game in New Orleans to complete a 12-2 season and win the BCS title. The only two losses the Tigers’ suffered were in overtime, once to Kentucky and the other to Arkansas. The Tigers were led by QB Matt Flynn and RB Jacob Hester, while the defense was dominant behind a tremendous defensive line led by DT Glenn Dorsey — who won every conceivable award that year — and DE Ricky Jean-Francois, the 2008 BCS Title Game MVP. LSU’s defense allowed opponents to only score 19.9 points per game in 2007 and would present a stiff test to the 2001 Miami team.