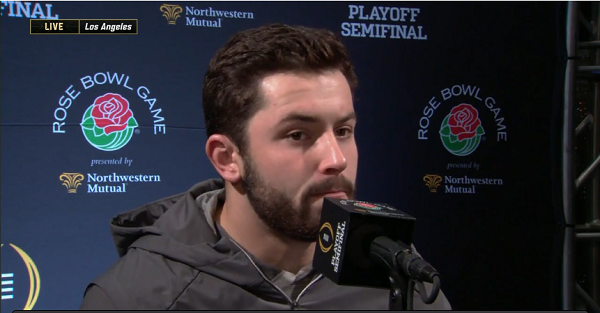 Oklahoma quarterback Baker Mayfield has been dealing with a pretty serious illness as he has missed the last few days of team activities and has not been made available to the media either. He was initially not going to show up for a scheduled media appearance, but that changed later in the morning.

This is Baker Mayfield’s podium but we were just told he’s not talking today … again. pic.twitter.com/09zZO60upl

Elvis is in the building. Oklahoma quarterback Baker Mayfield is here after it was announced he wouldn't show up to Rose Bowl Media Day. pic.twitter.com/9JMwwJJqeq

And you can tell he sounds a bit sick too from the way he answered questions. His voice isn’t quite the same and was a little more succinct in his answers:

He also revealed why he ended up showing up after it was reported he would miss the activities:

Baker Mayfield decided to show up to Rose Bowl Media Day late after he flipped on the TV on Saturday morning and saw reports that he wouldn't be there. "That's when I realized this isn't about me. It's about Oklahoma. My teammates shouldn't have to answer questions on my behalf." pic.twitter.com/d399cdHR6v

While he is apparently doing better than he was a few days ago, he still sounds a bit rough. He has another day to get better though before he has to get on the field and perform against a stout Georgia defense. The Rose Bowl is set for a 5:00 p.m. kickoff on New Year’s Day.