Colin Cowherd predicts who will win the College Football Playoff, and it isn’t Alabama 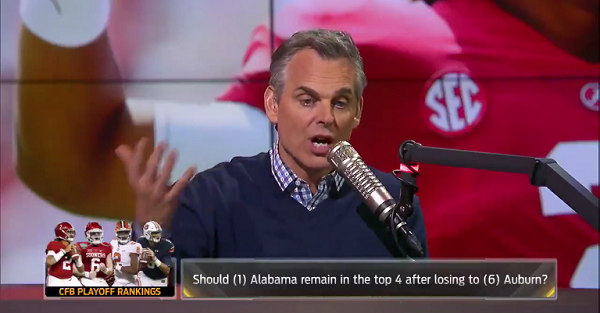 FOX Sports’ Colin Cowherd has made his pick for the College Football Playoff.

The analyst predicted Heisman Trophy winner Baker Mayfield will lead Oklahoma over Alabama in the national championship game during an episode of his show The Herd this week.

"Baker Mayfield will lead Oklahoma to a win over Alabama for the National Championship."

“I think Alabama’s had a series of injuries this year at the linebacking corps, they don’t have the pass rush they normally do and again, I think it’s a decided advantage by Oklahoma in the national championship game at quarterback,” Cowherd said. “Oklahoma, last time they faced Alabama beat them. There’s no fear in this team and they match up very well in the trenches. If you’re going to beat an Alabama, you’ve got to have a quarterback who is mobile. There is a special sauce to beat Nick Saban, it’s always been the mobile quarterback.

“So I’m going to go Oklahoma over Georgia by a touchdown, Alabama over Clemson by a touchdown or more and Oklahoma will be an underdog in the game, but Baker Mayfield will lead Oklahoma to a win over Alabama for the national championship.”

Oklahoma defeated Alabama, 45-31, in the 2014 Sugar Bowl during the last matchup between the two teams.

Mayfield recorded 4,340 yards, 41 touchdowns and five interceptions on 262-of-369 passing, as well as 310 yards and five touchdowns on 85 rushing attempts en route to winning the Heisman Trophy this season.

The College Football Playoff will begin on Jan. 1. Oklahoma will face Georgia at the Rose Bowl in Pasadena. The Tide will matchup with Clemson in a rematch of last year’s national championship at the Sugar Bowl in New Orleans.