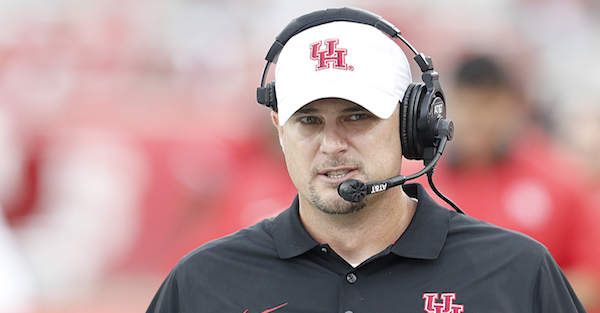 Thomas B Shea/Getty Images
HOUSTON, TX - SEPTEMBER 10: Houston Cougars head coach Tom Herman walks the sidelines as he coaches against the Lamar Cardinals in the second quarter at TDECU Stadium on September 10, 2016 in Houston, Texas. Houston won 42 to 0. (Photo by Thomas B. Shea/Getty Images)

Houston had been searching for a head coach ever since Tom Herman left for the Texas head coaching job. That was, until they promoted from within and moved up Major Applewhite to head coach. Sports Illustrated‘s Pete Thamel is reporting that former Houston head coaching candidate Todd Orlando is now moving on to stay with Tom Herman.

Texas coach Tom Herman has secured perhaps the most important piece of his coaching staff, as multiple sources told Sports Illustrated that defensive coordinator Todd Orlando has agreed to join him in Austin. Orlando served as Herman’s defensive coordinator in Houston for two seasons, building a reputation as one of the country’s top defensive strategists. Sources said Orlando is expected to sign a three-year deal worth more than one million per year.

And it looks like the move has been confirmed:

Orlando is currently leading the Cougars in the Las Vegas Bowl against San Diego State, but will obviously head to Austin after that game. It looks like Tom Herman’s coaching staff is coming together quite nicely.