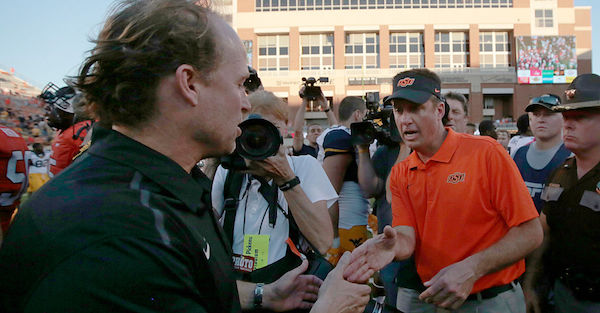 One of the longest-tenured coaches in college football is getting a new deal, and a nice raise to go with it.

According to Bruce Feldman of FOX Sports, Oklahoma State and Mike Gundy have agreed to terms on a new five-year deal that will be worth more than $4.2 million annually.

Mike Gundy gets a new long-term deal at #OKState for five years (old deal expired in Dec, 2019).. Will now make $4.2 million per year

The deal will also come with a $125,000 escalators annually, meaning that Gundy will be approaching $5 million annually at the end of the deal.

Gundy has proven to be worth the money that Oklahoma State is giving them, as he has turned the Cowboys into one of the most consistent programs in college football. Oklahoma State has won 10 games in five of the last seven seasons, including a 12-1 season and No. 3 finish in the AP Poll in 2011.

And of course, he sticks up for his players.

Gundy has essentially been an Oklahoma State lifer, as he was the starting quarterback for the Cowboys back in the late-1980s. Gundy was then an assistant for several years before eventually becoming the offensive coordinator under Les Miles. After Miles left for Michigan State, Gundy inherited the program and will be entering his 13th season as head coach this upcoming year.