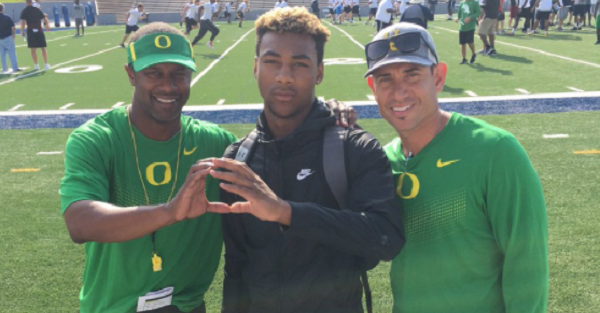 Arjei Henderson is one of the best players in the Class of 2019 and, by proxy, one of the top uncommitted prospects in the group. With that said, the talented wide receiver from Fort Bend Travis (Tex.) was once committed to the Oregon Ducks but, as of mid-November, that is no longer the case and Henderson has cast a wide net with regard to where he will land for next year.

To that end, Henderson announced on Friday morning that he will be taking five official visits in the next few months and the lucky programs are the Texas A&M Aggies, Texas Longhorns, Oklahoma Sooners, TCU Horned Frogs and Ole Miss Rebels.

At the moment, 247Sports ranks Henderson as the No. 16 overall prospect in its composite rankings and that places him as the No. 3 player from Texas and the No. 3 overall wide receiver in the group. The website’s “Crystal Ball” projections place Oklahoma in a significant lead for Henderson’s commitment, perhaps lending some quality insight, but this is a very interesting list of programs to be evaluating and that makes for quality recruiting content in the coming days.

Arjei Henderson is a big-time get for whichever program lands his pledge and, given this list, it is a safe bet to think that one of the five programs noted has the inside track.