The Big Ten just awarded their commissioner with an enormous bonus 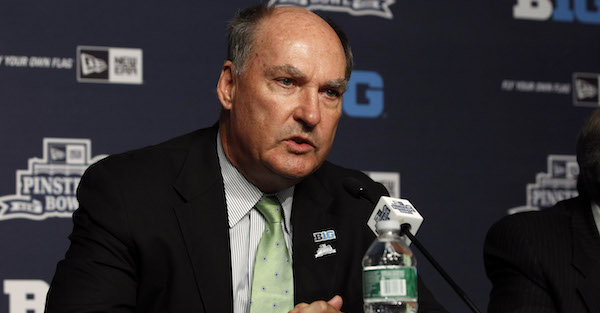 The Big 10 has had a successful few years in sports?particularly football?and commissioner Jim Delany will soon reap the benefits.

Related: The SEC once again made a record amount of money in 2016 thanks to the SEC Network

The conference detailed the amount of Delany’s bonus on its tax return covering the fiscal year of July 1 through June 30. The Big 10 doesn’t have to release specific employee agreements because it is a non-profit organization, and deputy commissioner Brad Traviolia declined to comment on Delany’s bonus.

University of Minnesota president Eric Kaler, who is the chairman of the Big 10 Council of Presidents and Chancellors, said in a statement that Delany’s compensation “reflects the value and impact of his leadership.”

“Commissioner Delany has provided invaluable leadership for Big Ten member institutions while delivering first-in-class performance during a time of great transformation in college athletics,” Kaler said. “He has not only successfully balanced the missions of academic achievement, student-athlete development and athletic success, he has successfully developed the resources necessary to strategically position the conference for success well into the future.”

Delany has positioned his conference for well into the future and is certainly doing a little better than the Big 12 in regards to rumors about losing schools.