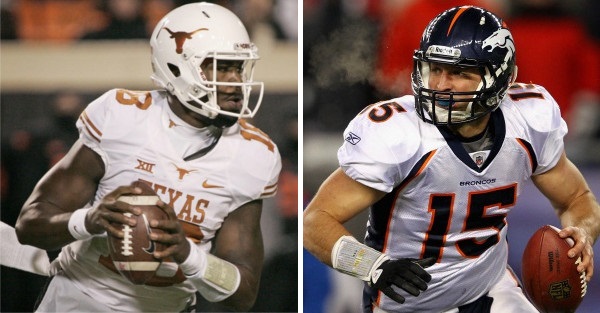 There are some guys who try to enter the NFL Draft at their primary position and end up switching the role they play in order to get more playing time. That was the big stink about Tim Tebow when he tried to make his comeback and refused to switch to a tight end or fullback. It looks like one player will actually make the switch before the NFL Draft this year in Texas QB Tyrone Swoopes.

RELATED: Chip Kelly says Tim Tebow will only play QB for the Eagles

In his four years at Texas, Swoopes managed to accumulate 17 passing touchdowns against 13 interceptions and 3,038 passing yards. His best season came in 2014 when he passed for 13 touchdowns and 11 interceptions as well as 2,409 yards. However, this year he took a backseat to freshman Shane Buchele and was primarily used in what was called the “18-wheeler” set, named so for his number and size.

RELATED: Texas has a really bad offense and we found the reason why

The 6’4″, 249-pound Swoopes had seven rushing touchdowns and 174 rushing yards this season, but didn’t record a single reception despite his wanting to move to tight end. Swoopes had actually talked to Charlie Strong about switching to tight end before this season, but Strong was not a fan of the move. Swoopes told Orangebloods.com that the move isn’t totally out of the blue and he’s actually been working on it.

“After the season, I spoke with some agents. They all said that (moving to tight end) was the right move based on everything they were hearing (from scouts and league sources).

“I have the basic technique of route-running down – I have good hands; big hands. I don’t think getting the ball in them is difficult. I’ve been mainly focusing on seeing it in and tucking it in.https://twitter.com/AnwarRichardson/status/773592885304266752

“I’ve been doing technique, blocking, footwork, I have great coaches.”

And it looks like he’s had a good enough showing to get him a mid-round grade:

Of course, he will have the NFL Combine to show scouts and front office personnel what he can really do and how far he’s progressed as a pass-catcher rather than a pass thrower.