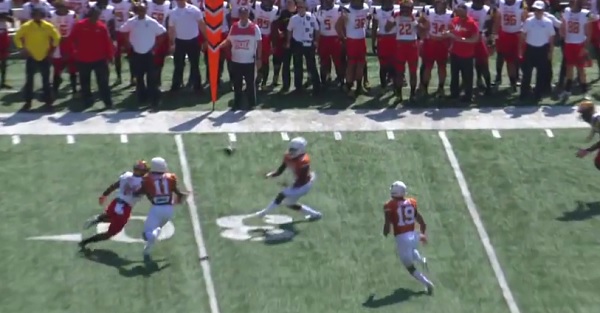 This is about the best way possible that things could have started for Tom Herman at Texas.

The Longhorns are opening the season with a decent out-of-conference matchup against D.J. Durkin’s Maryland team, and Texas was able to take an early and crowd-pleasing lead with a pick-six thanks to defensive back Holton Hill.

After all of the hype of Herman coming in to replace Charlie Strong, this is exactly the start Texas needed to their season. Of course, they will have to prove that the start isn’t a flash-in-the-pan, and continue to put up a strong effort — not only to get a win here — but to keep it going throughout the entire 2017 season.

For what it’s worth, Texas also forced a 3-and-out on the next Maryland possession.

UPDATE: Well, Maryland has now taken a 27-7 lead, so maybe Texas is still working the kinks out.