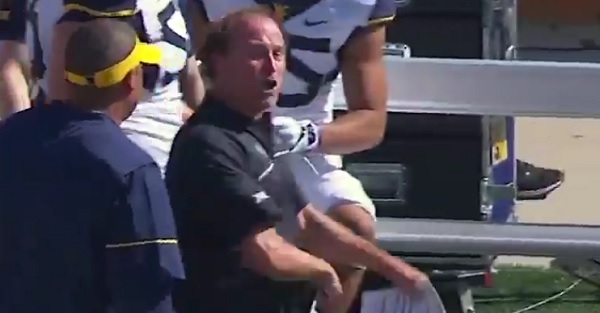 Apparently one official forgot to turn off his in-stadium microphone at a critical point in the game between West Virginia and Texas.

West Virginia coach Dana Holgorsen was upset after a kick-catch interference call took away a fumble recovery by his Mountaineers. Holsgorsen let the head official have it, and it appears that the entire stadium was party to that conversation.

#WVU recovered the fumble but a inference call gives the ball back to Texas. Holgorsen is not happy

Holgorsen, to ref, on mic: "Our guys have bigger balls than their guys. … Get the f*** outta here."

Holgorsen (unknowingly mic'ed up) asks ref: "We got a penalty because our guy has balls and their's doesn't?" #WVU

Official's microphone was on and #WVU coach Dana Holgorsen said: "Our guys got bigger balls than their guys"

Apparently that wasn’t the first time in the game that Holgorsen was upset.