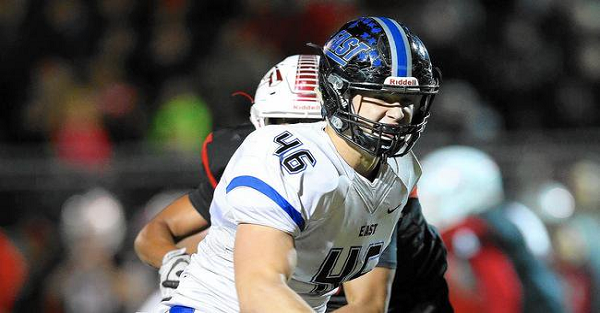 Northwestern has been slowing gaining steam in the Big Ten as a formidable football team going to a bowl game seven out of the 11 years Pat Fitzgerald has been at the helm as coach. Some of that is great coaching while a little bit is also strong recruiting and it looks like the Wildcats have landed another great recruit in four-star strong side defensive end Devin O’Rourke.

The 6’6″, 240-pound defensive told Yahoo! that a pretty long one-on-one talk with Fitzgerald sealed the deal:

“I had a one on one talk with Coach (Pat Fitzgerald) Fitz for about 45 minutes and after that I was sold on Northwestern. I just couldn’t find a school that’s going to be a better fit for me and after that talk I totally bought into the program at Northwestern. I never really had a time frame to be honest. I just felt all along that whenever I was 100 percent ready to commit I would commit. I’m ready to commit so I called up the Northwestern coaches and gave them my verbal commitment. I didn’t see any need to drag it out.”

O’Rourke is rated as the No. 9 strong side DE by 247Sports and had offers from Illinois, Minnesota, Nebraska, Penn State and Wisconsin among a few others. He’s also rated as the top recruit in the state of Illinois.