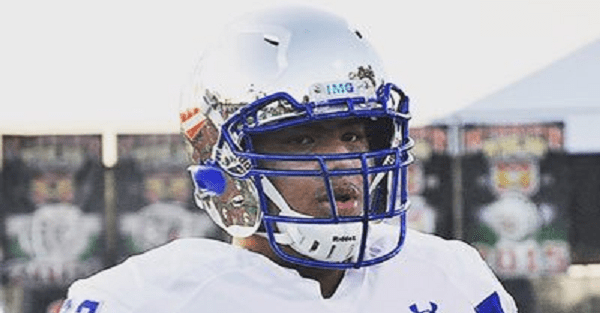 Three-star offensive lineman Daniel Faalele is one of the biggest recruits in major college football in recent years. The 6-foot-8, 400-pound Faalele has been dubbed “Baby Shaq” thanks to his size, and now the massive Australian has a home, as he has announced his commitment to Minnesota.

I am 1000% committed to the university of Minnesota. Please respect my decision. #RTB #SkiUMah pic.twitter.com/1VkgjpiaVR

The commitment comes just after Faalele had taken an official visit to Minnesota this past week. Faalele, a highly-ranked three-star recruit, also had offers from schools like Alabama, Georgia, and Florida State, an impressive feat considering that the Australia native has only been playing American football for a couple of years.

Of course, size helps. For some context on just how large Faalele is:

2018 OT Daniel Faalele is on a visit to #FSU, and he's so big that he barely fits in the golf cart. pic.twitter.com/4FgoqvYIzx

Faalele is Minnesota’s third highest-rated commitment of the 2018 recruiting class, which currently ranks 26th in the nation at 247Sports. It’s the highest ranked class for Minnesota in years, so clearly head coach P.J. Fleck is making some waves with the boat rowing up in Minneapolis.