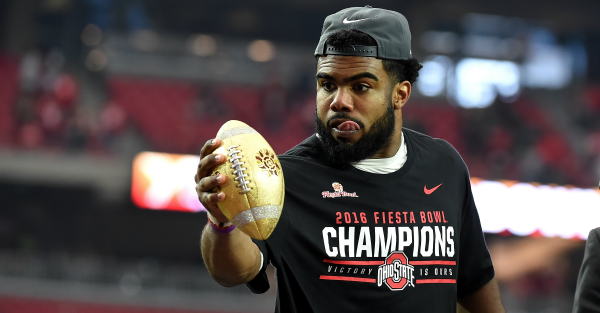 We already know that Paul Finebaum doesn’t have a whole lot of nice things to say about Michigan head coach Jim Harbaugh and it seems former Ohio State running back Ezekiel Elliott feels a similar way. He was on the Finebaum show to talk about the Ohio State-Michigan rivalry a bit and he lit up Harbaugh pretty hard.

"I'm tired of hearing about Coach Harbaugh he needs to get in check with reality" – @EzekielElliott pic.twitter.com/QHElXCl7QV

more from @EzekielElliott: "you can't talk smack about a rivalry when you haven't won a game. You have to win ballgames to talk behind it."

This has been your daily reminder that there are few rivalries better than the Ohio State and Michigan one out there. Please never change, Buckeye and Wolverine fans.