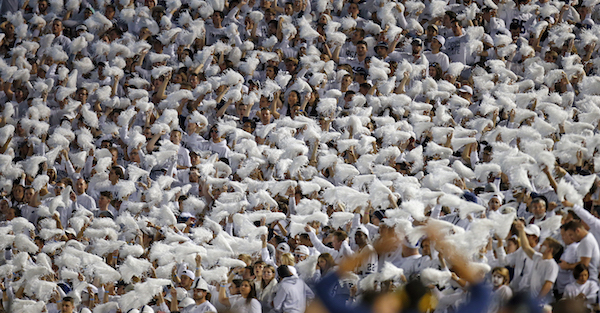 Penn State was widely expected to take care of business in a home game against Michigan on Saturday night, but James Franklin’s team exceeded any rational projection. The final result was a 42-13 win over Jim Harbaugh and the Wolverines and, in short, there was no doubt as to who the better team was on the field in Beaver Stadium in front of a “White Out” in Happy Valley.

Following the game, it is certainly understandable that members of the Wolverines squad would be frustrated by the 29-point drubbing and Michigan’s Lavert Hill had an interesting visual message for the Penn State faithful.

Former Penn State commit Lavert Hill was not a fan of the White Out. pic.twitter.com/WZpx8kQxuw

Yes, that is a current Michigan player flipping double birds to the opposing fans and it is made even more interesting by the fact that well, Lavert Hill was once committed to play at Penn State. Hill has become a strong player in Michigan’s secondary, but given that this was captured on camera, it is a pretty bad look for both player and program in this instance.

It is reasonable to believe that James Franklin attempting to run up the score by running multiple plays in the final seconds of a 29-point game was out of line and Michigan fans likely do. Still, the actions of Hill here leave plenty to be desired and the Penn State faithful won’t be forgetting it anytime soon.