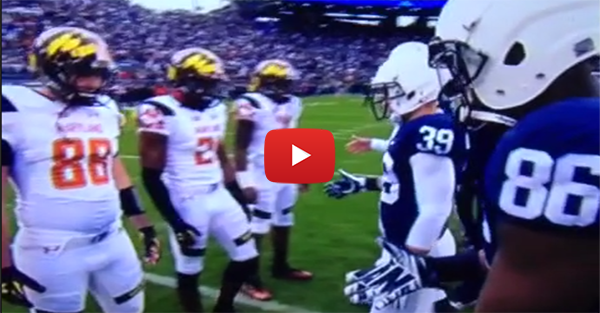 Maryland was penalized 15 yards before the game even started on Saturday afternoon after they had a confrontation with Penn State and then the captains refused to shake hands after the coin toss.

The Terps were further reprimanded by the Big Ten today as they were fined $10,000 for the skirmish. Head Coach Randy Edsall was also issued a public reprimand, and WR Stefon Diggs — who was the one flagged for the incident — has been suspended for one game (via Big Ten Network).

The Big Ten determined that Edsall failed to control his team prior to the game when Maryland players initiated a confrontation with Penn State players. The officials did a good job of containing the situation once it started, and fortunately the incident did not escalate any further. In addition to Edsall’s public reprimand, the conference announced that the institution has been fined $10,000 as a result of the violation.

The Big Ten also determined that Diggs’ actions toward officials and opposing players before the game violated conference policy. Diggs will serve his one-game suspension on Nov. 15 against Michigan State.

Maryland’s athletic director apologized for the incident Saturday (via ESPN).

“We are extremely disappointed in the actions of our captains involved in today’s coin toss. Their behavior is not a reflection of how our student-athletes should conduct themselves in athletic competition.”

Diggs made a statement today.

Stefon Diggs in a statement: "I sincerely apologize for my conduct prior to kickoff this weekend"