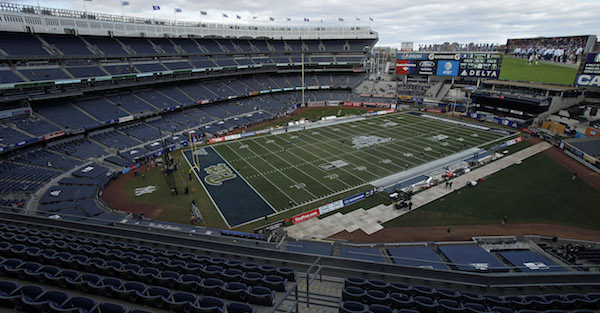 The New York Yankees were not necessarily supposed to make a deep run in the 2017 MLB Playoffs. Make no mistake, the team is filled with talented players, but the Yankees are in the middle of a transition to something of a youth movement and it wasn’t as if New York was seen as a real contender to make a World Series run.

Now, though, the Yankees are very much alive in pursuit of the title and that will have an impact on the college football world. In short, Rutgers and Maryland were scheduled to face off against each other at Yankee Stadium on Nov. 4 and, given that the Yankees are still active, that game will be moving back to Piscataway and Rutgers’ home venue.

Rutgers’ scheduled Nov. 4 matchup against Maryland at the stadium will now be played at the Scarlet Knights’ High Point Solutions Stadium in Piscataway, New Jersey.

An official release indicated that the choice was made this early “to allow a sufficient amount of time to logistically stage the events in Piscataway due to the Yankees’ current postseason run” and Rutgers AD Pat Hobbs seems to be on board.

“We were looking forward to staging this historic event at Yankee Stadium. With two weeks until the date, it was important for us to finalize details that help ensure our fans and our student-athletes have a one-of-a-kind experience. As a result of the Yankees’ amazing postseason run, there were operational concerns that called for us to make a decision at this time. It was agreed that moving the game to High Point Solutions Stadium was the best option under the circumstances. We value our continuing partnership with the New York Yankees and will be cheering them on this weekend and hopefully in the World Series.”

It was, after all, a “home game” for the Scarlet Knights and they get that back as a result of this switch. Still, the high-profile nature of a college football game taking place in that famous venue is now gone and the attention on a November game between two off-the-radar Big Ten teams might wane as a result.