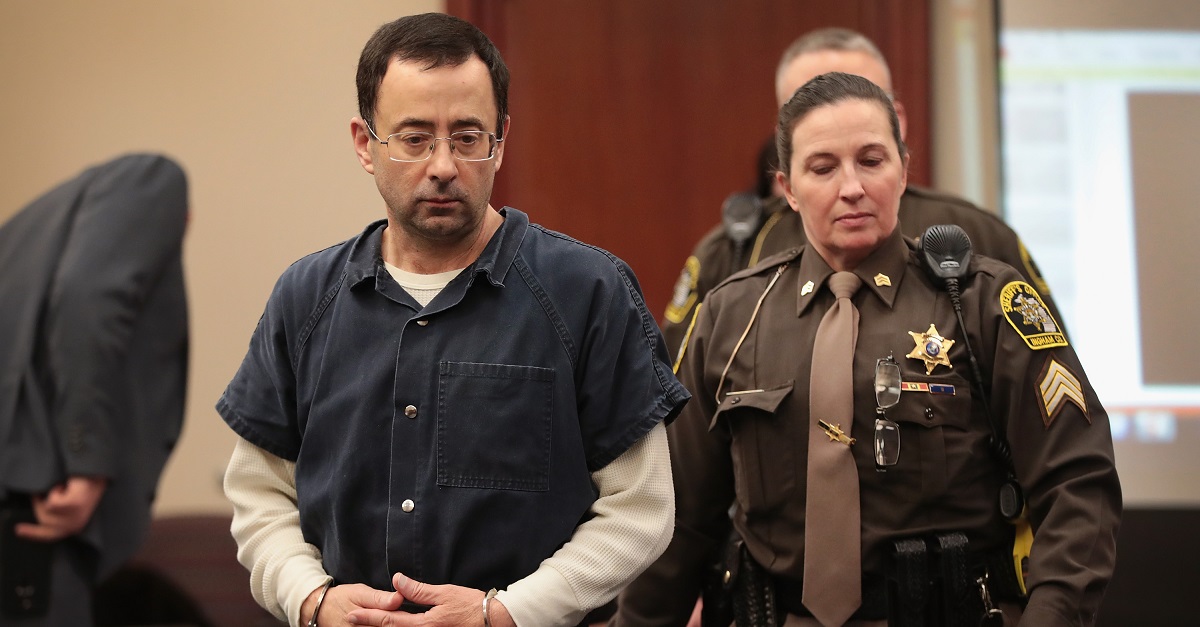 Scott Olson/Getty Images
LANSING, MI - JANUARY 16: Larry Nassar appears in court to listen to victim impact statements prior to being sentenced after being accused of molesting about 100 girls while he was a physician for USA Gymnastics and Michigan State University, where he had his sports-medicine practice on January 16, 2018 in Lansing, Michigan. Nassar has pleaded guilty in Ingham County, Michigan, to sexually assaulting seven girls, but the judge is allowing all his accusers to speak. Nassar is currently serving a 60-year sentence in federal prison for possession of child pornography. (Photo by Scott Olson/Getty Images)

According to a report, Michigan State failed to hand over important documents concerning Larry Nassar during dual investigations. Moreover, the university asked an oversight organization to stop monitoring it while doing its own investigation of Nassar.

ESPN’s Outside The Lines is reporting Michigan State, a university under U.S. Department of Education oversight since 2014 because of its mishandling of sexual assault and gender discrimination cases, asked for that to end. That request, specifically due to the Nassar situation, was obviously rejected.

Directly from an outstanding ESPN report:

Michigan State administrators in 2014 did not notify federal officials that the university had dual Title IX and campus police investigations of Nassar underway even though federal investigators were on campus that year scrutinizing how MSU dealt with sexual assault allegations.

MSU administrators still have not provided to federal officials all documents related to the Nassar allegations.

The entire report should be read in full.

One of the biggest revelations made in the report is that the university didn’t hand over documented allegations against Nassar despite federal authorities literally being on campus due to how poorly the university had handled previous issues of the same ilk.

According to a lawyer representing Michigan State, he claimed all failings to hand over paperwork happened to be an “unfortunate oversight.” This happened months prior to Nassar going to court.

Outside The Lines reports that, at the time of this writing, Michigan State has still failed to hand over those documents.

Nassar, 54, pleaded guilty in November to 10 counts of first-degree criminal sexual conduct with victims as young as 6 years old. He was sentenced to 40 to 175 years in prison on Wednesday.

156 strong women stood up and against the predator.