An 11-2 record and a thrilling Rose Bowl victory are what many football programs across the country dream of, but it was a mere consolation prize for Ohio State football in 2022. An early season loss to Oregon at home didn't derail their Playoff aspirations, but what really stung the Buckeyes was a lopsided loss to rival Michigan in "the Game," which cost Ohio State a spot in the Big Ten championship game and the College Football Playoffs.

No doubt, OSU fans will have November 26 vs. Michigan circled in blood on their calendars after last year's surprising loss during rivalry week. That loss knocked Ohio State down the rankings and gave Michigan a path to the College Football Playoff. However, the football gods were merciful to Buckeye fans, as Georgia and Alabama played in the national title game, not the Michigan Wolverines.

But the rest of the season will determine the stakes for that game. The season opens with Notre Dame on September 3. No late summer walk in the park there. Penn State and Michigan State serve as potential stumbling blocks on the schedule as well.

But head coach Ryan Day's Ohio State Buckeyes have the potential to exceed offensively with Heisman-favorite CJ Stroud under center again. Impact players at wide receiver and running back help make Ohio State our preseason favorite to win the national title in January. Here are five players that can see that through. 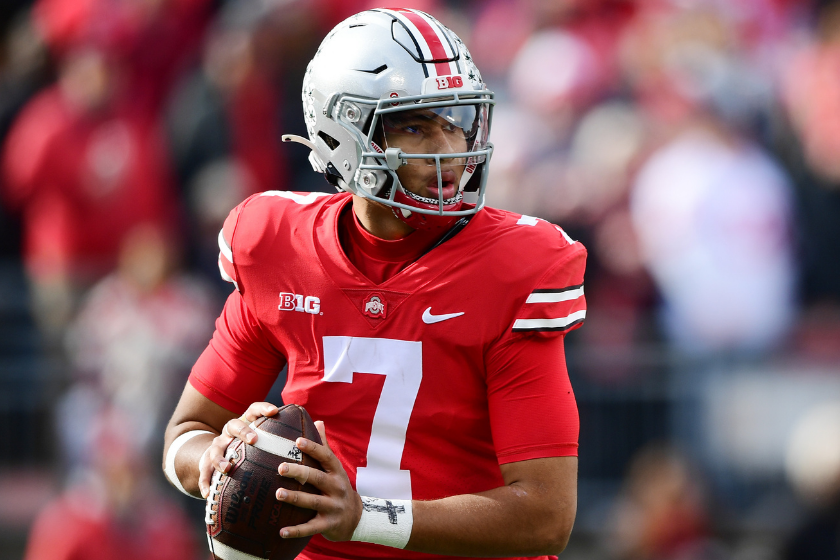 There wasn't supposed to be another Justin Fields in Columbus this quickly, but that is exactly what CJ Stroud is. Heisman favorite, potential No. 1 overall pick in 2023 and superstar Ohio State Buckeye are only a few lines on Stroud's resume. One thing missing is a national championship, and that is a realistic goal for OSU this season. In 2021, the Heisman finalist tossed 4,435 yards, 44 touchdowns and just six interceptions. He was fifth in yards, third in touchdowns and first in overall QBR at 91.6. With wide receiver Jaxon Smith-Njigba back again, Stroud has the weapons and the tools to lead Ohio State back to the national title game this season. 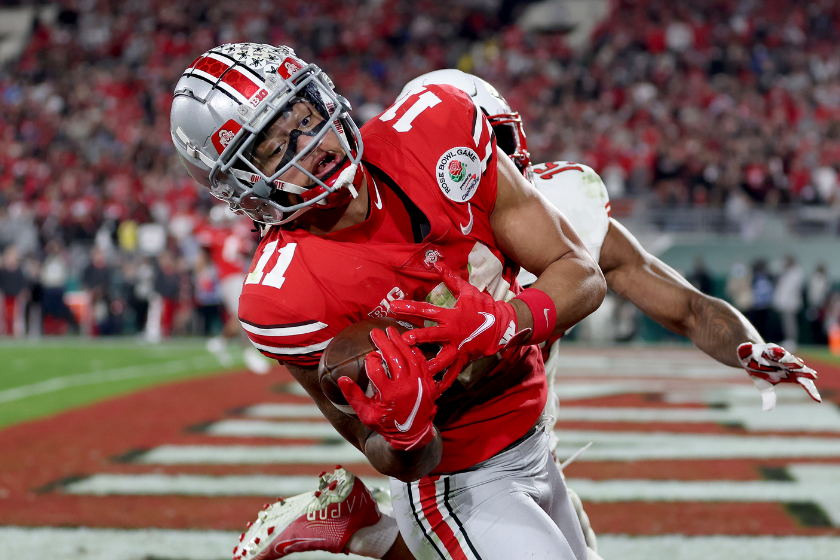 Jaxson Smith-Njigba led Ohio State in almost every statistical receiving category in a breakout year last season. It was expected that Smith-Njigba would take a backseat to Chris Olave and Garrett Wilson last season as a slot receiver. But what does it mean when your No. 3 receiver leads the team in receptions and yards over two receivers that were selected within the first 11 picks of the first round of the 2022 NFL Draft? First off, we call that a good problem to have. It also means don't be surprised if Smith-Njigba sets receiving records at Ohio State this year as one of their top offensive threats. Looks like Olave and Wilson won't be the only first-round draft picks coming out of that Buckeyes receiving corps. 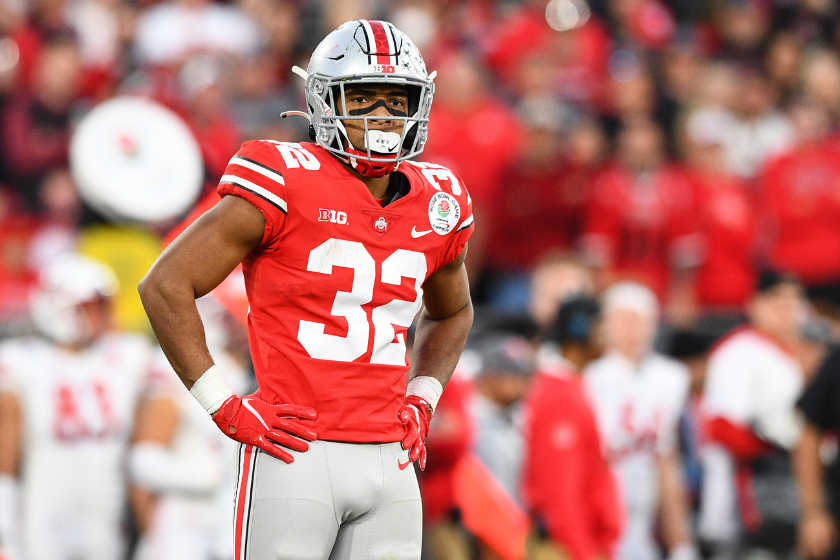 Speaking of offensive threats, TreVeyon Henderson burst onto the scene in the Big Ten to the tune of 1,248 yards and 19 all-purpose touchdowns on his way to Second Team All-Big Ten honors. He will be one of the top offensive weapons this season in Ohio State's bid for a national championship. 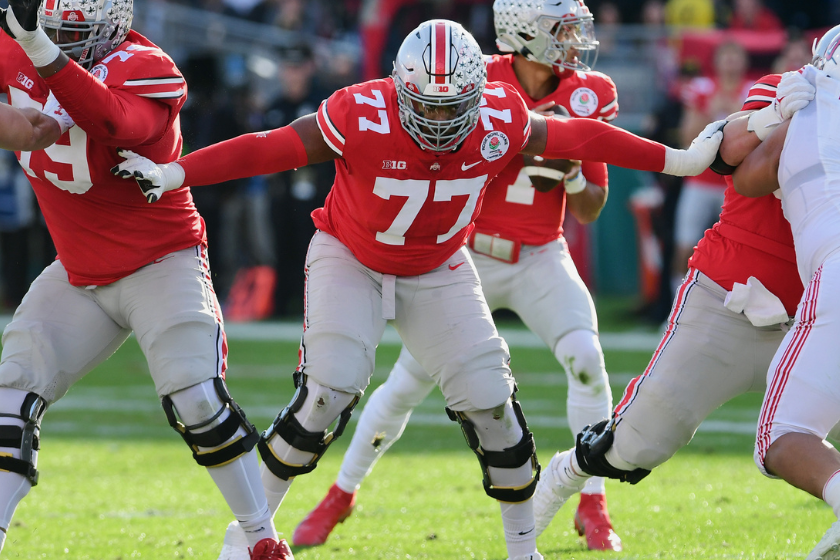 For Stroud, Smith-Njigba and Henderson to have success this season, so much of that hinges on the Buckeyes offensive line. Leader and future pro prospect offensive tackle Paris Johnson will be at the helm. The 6-foot-6, 315-pound left tackle was Second Team All-Big Ten a season ago. We always say the offensive lineman are the unsung heroes of a football team. OSU should have one of the best offenses in the country this season, and a big part of that will be thanks to the play of Paris Johnson. 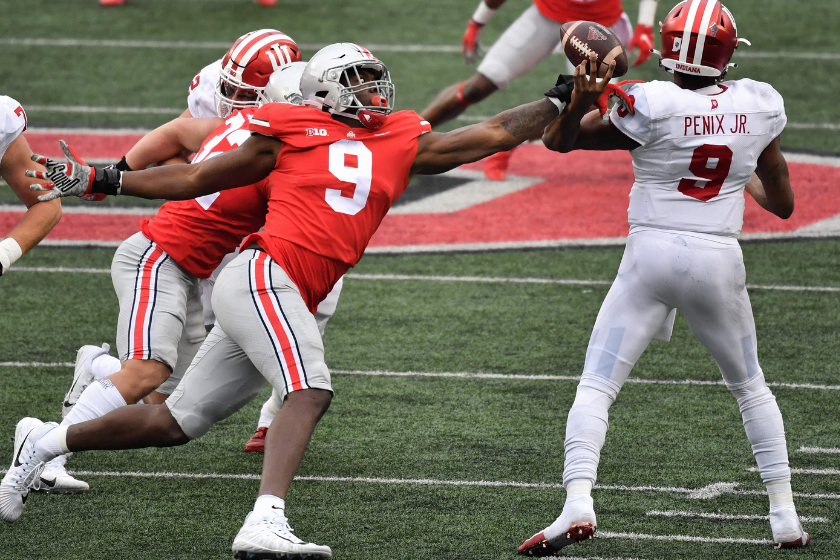 Could this be the year Zach Harrison etches his name alongside recent Ohio State edge rushers like Joey Bosa, Nick Bosa and Chase Young? That's a tall order and one we are sure defensive end Zach Harrison is ready to live up to. He wasn't where he wanted to be after last season, which is one of the reasons he decided to forgo the draft for a year and return to Columbus. Defensive coordinator and linebackers coach Jim Knowles knows Harrison has areas to improve upon. But if he can reach that next level, the OSU defense will be much more dangerous this season, especially with crown jewel of OSU's recruiting class, five-star high school linebacker C.J. Hicks, arriving on campus in Columbus. Great things are a given for the other four players on this list. Zach Harrison may be the wildcard to watch out for in 2022 on the Buckeyes defensive line. The Bosas, Young, Harrison? Maybe! This season, we could be adding to that list.

MORE: Ezekiel Elliott's "Through The Heart of the South" Run Was 85 Yards of Glory