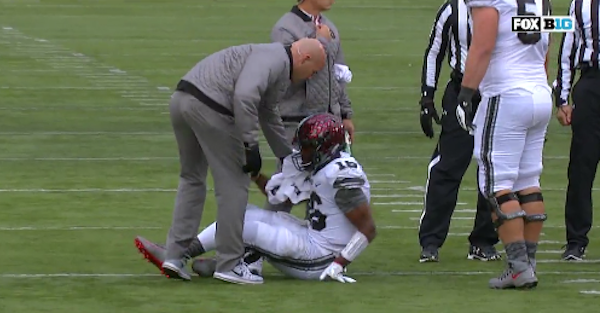 Ohio State had to push past Michigan without quarterback J.T. Barrett, who left in the third quarter with a right knee injury.

According to Buckeyes head coach Urban Meyer, Barrett’s knee injury didn’t occur during the game, rather before it. And it apparently involved a cameraman:

Barrett told media someone darted past him and collided with his leg and hurt his knee. Barrett didn't think it was malicious. He didn't see a camera. But eye witnesses said it was a "cameraman," hence Meyer's remarks. No one certain if still photographer or TV.

There's no formal investigation, but Ohio State is looking into how it happened. Spokesman stressed they take sideline management very seriously. Are limited with access there.

Injury happened before the game. Urban wants “all-out investigation.” I’ve really never seen him this angry in a press conference.

Urban Meyer said J.T. Barrett sustained the injury before the game. Said it involved a camera man. And he's quite upset. #Buckeyes pic.twitter.com/kmnPm2Yoof

Barrett is reportedly dealing with an on-going meniscus issue that forced him to the locker room:

Jenny Taft just said J.T. Barrett is dealing with an "ongoing" meniscus issue where it pops out and has to be popped back in.

Barrett had thrown for just 30 yards through two and a half quarters with one touchdown. He also ran for 67 yards and a touchdown.

Red-shirt freshman Dwayne Haskins Jr. led the Buckeyes right down the field to give Ohio State the lead and the eventual win, 31-20.