One of the biggest Big Ten matchups this season has come and gone. And while No. 2 Ohio State managed to pull off the 44-31 win over No. 13 Penn State, one player made sure his name would be talked about for weeks to come.

Defensive end J.T. Tuimoloau had one of the best defensive performances seen by the Buckeyes this season -- and potentially in history.

In an almost never-ending list, the sophomore finished the game with 6 tackles, 2 sacks, 2 interceptions, a forced fumble and a pick six. During the State Farm Halftime Show, former player Emmanuel Acho stated this was the best defensive performance he'd seen in over 10 years.

"December 6, 2009 was the greatest college football game by a defender, Ndamukong Suh, with 12 tackles, 7 TFLs, 4 1/2 sacks," Acho said. "Today, I saw a better game by J.T. [Tuimoloau]. I've never seen a performance like this defensively in my days of watching and playing college football." 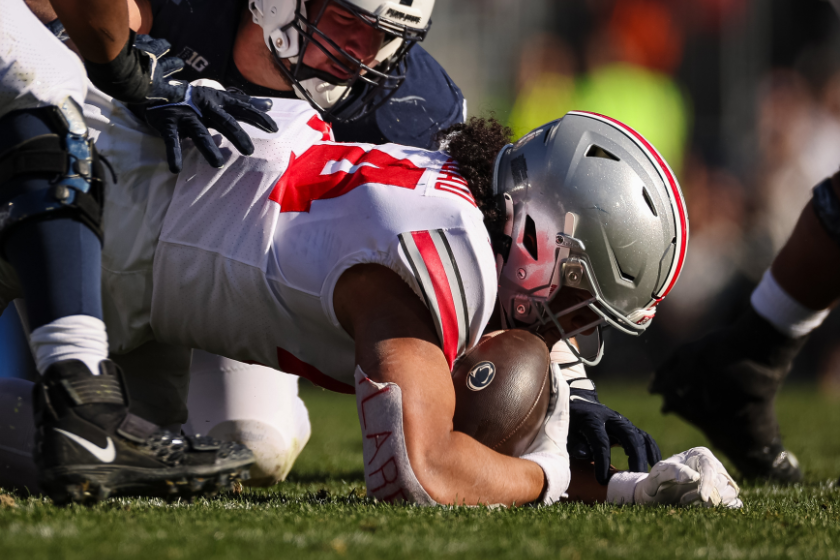 Reviewing social media the morning after, this sentiment was echoed by several analysts and media outlets all over the country. Some of the most popular social accounts, such as PFF College, Overtime and Bleacher Report, did nothing but sing praises for the sophomore.

Following such a monumental performance, Tuimoloau received several honors from around the Big Ten and around the nation.

By now, one might wonder how such a young player managed to finish the day with such an extensive stat sheet. Well, get ready for this because it's wild.

From Penn State's very first possession, Tuimoloau wasted no time. On a pass from Penn State QB Sean Clifford, he tipped the ball leading to an interception from fellow Buckeye, DE Zach Harrison. On the next possession from the Nittany Lions, he intercepted a pass that led to a touchdown three plays later from the offense.

By the middle of the fourth quarter, the Buckeyes had a narrow 23-21 lead, leaving it up to the defense to get the ball back in the hands of the offense. Tuimoloau did just that with a sack on Clifford where he forced a fumble and recovered it -- himself. In the very next play, the Buckeyes extended their lead with another touchdown. With time running out in the game, Tuimoloau intercepted another pass and took it to the house for a pick six.

Ohio State's Defense Proves It's Just as Potent as Their Offense

Going into Week 10, and in just his second year, Tuimoloau has quickly established himself as one of the most dangerous players on the Ohio State roster.

In just eight games, the sophomore has compiled 15 tackles with 6.5 for a loss, 2 1/2 sacks, 2 interceptions, 4 quarterback hits and a forced fumble. He currently ranks 11th in the Big Ten in tackles for loss and sixth as a defensive lineman.

The Buckeyes stay at No. 2 in the AP Polls as of this week, and having a player like Tuimoloau makes it that much harder to topple them. With a game at Northwestern this Saturday, which ranks seventh in the Big Ten, Ohio State fans can be sure to see Tuimoloau making more huge plays as the team attempts to hang on to its undefeated season.