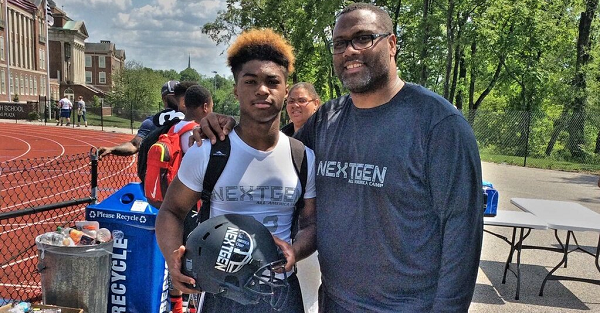 Four-star running back Mike Drennen II has a ton of time before he has to make a commitment since he’s in the class of 2020. However, he already has two schools he really likes and said that two rivals are atop his list right now. Here’s what he told 247Sports:

“My top schools right now (not in any order) would be Michigan, Ohio State, I just like Michigan and Ohio State to be honest,” Drennen said.

Drennen also mentioned what he likes about each school. With Ohio State it was running backs coach Tony Alford.

“We’re tight,” Drennen said of Alford. “We’re getting closer. He says they might pull the trigger soon. That would be crazy. It would make a lot of people proud out of my family. I’d be proud. It’s Ohio State.”

His cousin, Jaelen Gill, is also about to land on campus in Columbus so that might help down the road too. The 5-foot-11, 190-pound running back is ranked as the No. 11 recruit at his position and the top recruit in the state of Ohio State according to the 247Sports Composite rankings. He currently has offers from Louisville, Cincinnati, Indiana and Kentucky.