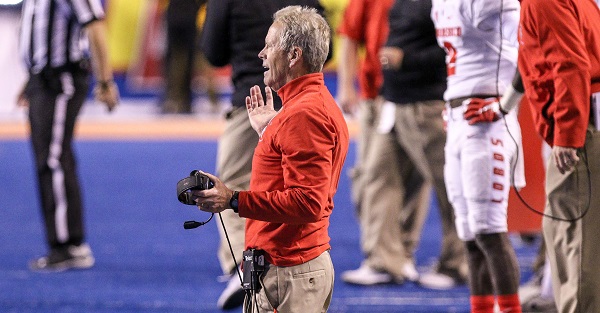 Less than one week ago, New Mexico suspended head football coach Bob Davie for 30 days and allegations against the former Notre Dame head coach and ESPN analyst were sweeping. As the suspension was issued, New Mexico released the following statement:

?Both (investigations) identified blind-spots as well as instances where UNM policies have been violated and outdated practices persist regarding University reporting processes. Although UNM has clear policies, procedures and options for reporting misconduct and has made important progress in simplifying these options, gaps still exist. We will close the gaps and will not accept confusion or ignorance of policies as an excuse. Behavior that violates our policies will not be tolerated. We will intensify our efforts to educate our campus community and change the culture of accountability within the University.

New Mexico Attorney General Hector Balderas ? who had already begun an investigation into athletics department issues ? announced Thursday he would expand it.

?We will never tolerate a university culture that denies students their basic rights through illegal discrimination or retaliation against those who report sexual misconduct. Our criminal and civil investigation into the University of New Mexico includes the handling of these issues and we are reviewing the actions of officials from top to bottom and any other organizations involved.?

Since then, Davie launched an appeal of his 30-day ban but, on Tuesday, the university’s Board of Regents reportedly voted to deny Davie’s request, per Mark Schlabach of ESPN. Within the ESPN piece, Davie is cited as giving the following statement:

“I fully cooperated in every respect and met multiple times with the investigators, but was never asked to meet with or provide information [to the Chicago law firm that conducted the last investigation].”

In addition, Davie’s statement (per ESPN) included the fact that the reports note that “none of the three investigations conducted over a nine-month period found he violated any school policy.”

At this time, no immediate timetable is available for Davie to serve the suspension but, given the severity of alleged misconduct, this is a developing story.